Danger Ahead: Russia Is Increasing Its Military Presence in the Arctic 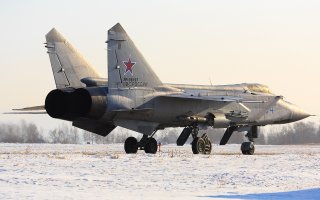 Russia has been amassing a military buildup and undergoing weapons tests in the Arctic, CNN reported Monday. Satellite images of the weapons in Russia’s northernmost reaches accompanied the report.

“Russia is seeing the Arctic ice melt fast, and filling the gap with a military buildup, some of it on Alaska’s doorstep, not seen since the Cold War,” the report said. The satellite images were provided to CNN by Maxar, a space technology company, and are from various times over the past five years.

The weapons being tested in the region include the Poseidon, which is described in the report as an “unmanned stealth torpedo is powered by a nuclear reactor and intended by Russian designers to sneak past coastal defenses—like those of the US—on the sea floor.”

The Poseidon is a submarine that has been described as “an 80-foot-long nuclear-powered submersible robot that is essentially an underwater ICBM.” It was named in a web contest by Russia’s Ministry of Defense, and it is positioned as “a retaliatory weapon that would revenge a U.S. first strike even if American missile defenses were capable of stopping hundreds of Russian ICBMs.”

"In the sea area protected from a potential enemy’s reconnaissance means, the underwater trials of the nuclear propulsion unit of the Poseidon drone are underway," an unnamed Russian defense official told the TASS news agency earlier this year.

The head of Norwegian intelligence told the news network that the weapon is “part of the new type of nuclear deterrent weapons. And it is in a testing phase. But it's a strategic system and it's aimed at targets . . . and has an influence far beyond the region in which they test it currently.”

The United States and NATO, however, have been answering the buildup, with both American B-1 Lancer bombers and the Seawolf submarine also stationed in the area.

“There’s clearly a military challenge from the Russians in the Arctic,” a senior State Department official said to CNN. “That has implications for the United States and its allies, not least because it creates the capacity to project power up to the North Atlantic.”

The Department of Defense also acknowledged the presence of the weapons to CNN.

Russian president Vladimir Putin, in 2018, is thought to have referenced the Poseidon weapon, stating that Russia may “move at great depths—I would say extreme depths—intercontinentally, at a speed multiple times higher than the speed of submarines, cutting-edge torpedoes and all kinds of surface vessels, including some of the fastest. It is really fantastic.”