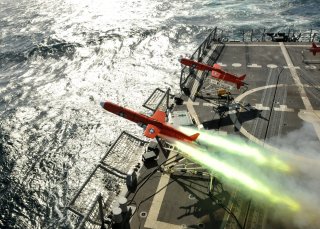 Here's What You Need To Remember: Underwater energy harvesting could revolutionize naval propulsion, or at least for robot submarines. If energy can be harvested from the ocean, perhaps by drones, and then transferred to human-crewed ships, then there would be less need to either return to port for refueling or to rely on nuclear reactors.

What’s better than an underwater drone?

An underwater drone that can remain at sea forever, or at least for long periods.

DARPA, the Pentagon’s pet research agency, has selected three companies for the Manta Ray project, which aims to develop a long-range unmanned underwater vehicle (UUV) that can operate without for extended periods without a need to return to port for maintenance and resupply.

“The Manta Ray program plans to advance key technologies that will benefit future UUV designs, including, but not limited to new energy management and energy harvesting techniques at operationally relevant depths; low-power, high-efficiency propulsion; and new approaches to mitigate biofouling, corrosion, and other material degradation for long duration missions,” according to the DARPA announcement. The program also seeks process improvements, including mission management approaches for extended durations while accounting for dynamic maritime environments; unique methods for leveraging existing maritime datasets and new maritime parameters for high-efficiency navigation; and new low-power means of underwater detection and classification of hazards.”

Lockheed Martin, Northrop Grumman and Navtek LLC have been tasked to work on the drones themselves, while Metron Inc. will develop underwater energy harvesting techniques.

The part about underwater energy harvesting is particularly interesting. Supplying energy for a ship’s propulsion system has always been a challenge. In ancient times, human-propelled vessels – sailors and galley slaves swinging oars to the beat of drums – needed to stay close to shore for food and rest. Sail-powered ships had a free energy source in the wind, but were dependent on where and when the breeze blew. Coal- and oil-fired ships needed frequent refueling, while nuclear reactors are big, expensive and potentially hazardous.

For underwater drones, power supply is a major limitation: they are small platforms unable to carry a nuclear reactor or large-capacity batteries. “Although AUVs [autonomous underwater vehicles] are a cheaper alternative to traditional vessels, power capacity of the vehicle’s battery remains a limiting factor and keeps their missions limited in range and duration, often as little as 24 hours,” noted a U.S. Department of Energy report on underwater vehicle recharging.

But underwater energy harvesting could revolutionize naval propulsion, or at least for robot submarines. “The Manta Ray program aims to increase at-sea operational capacity and capabilities for the combatant commander while minimizing disruptions to current operations by remaining independent of crewed vessels and ports once deployed,” said U.S. Navy Commander Kyle Woerner, DARPA’s Manta Ray program manager. “If successful, this new class of UUVs would allow operational flexibility and relief of workload for both traditional host ships and servicing ports.”

The Navy is also developing wave gliders, such as those devised by California-based firm Liquid Robotics, which utilizes the up-and-down motion of the ocean waves: the wave motion is captured by a surface vehicle, which imparts the energy via a towing cable to an underwater drone.

The most interesting aspect of this research may prove to be the impact on manned vessels. If energy can be harvested from the ocean, perhaps by drones, and then transferred to human-crewed ships, then there would be less need to either return to port for refueling or to rely on nuclear reactors.