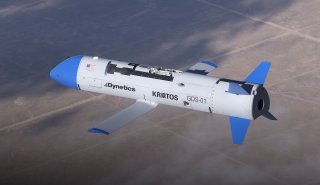 During World War II, “gremlins” were often blamed for inexplicable accidents that sometimes occurred during Royal Air Force operations. They were essentially a form of scapegoat for aircraft, who took the blame for such incidents as causing bombs to change direction and land away from targets—and in fact, they became a form of a morale booster. Gremlins soon spread to the United States Army Air Force, where pilots could complain about any host of issues, such as reliable engines failing or nuts coming loose in flight.

Today, there is a new type of Gremlin that is welcomed by the U.S. military and might actually save some potential in-flight troubles—the X-61 Gremlin Air Vehicle (GAV), an experimental unmanned aerial vehicle designed by Dynetics. It originated as a Defense Advanced Research Projects Agency (DARPA) program to demonstrate a low-cost UAV with digital flight controls and navigation system that could be recovered mid-air by a modified transport.

Last month, two X-61 GAVs were successfully recovered during a program flight test, which validated its autonomous formation flying positions and safety features before one GAV ultimately demonstrated airborne recovery to a C-130 Hercules. It occurred at the end of October over the Dugway Proving Ground (East), Utah. Multiple tracks were flown at speeds between 160 knots and 200 knots, with altitudes varying from 9,500 feet to 14,500 feet and legs about twenty-five nautical miles long.

“This recovery was the culmination of years of hard work and demonstrates the feasibility of safe, reliable airborne recovery,” Lt. Col. Paul Calhoun, the program manager for Gremlins in DARPA’s Tactical Technology Office (TTO), said. “Such a capability will likely prove to be critical for future distributed air operations.”

During the final experiment in October, the team refurbished an X-61 vehicle and conducted a second flight within twenty-four working hours. Moreover, a multitude of hours of data was collected over four flights including air vehicle performance, aerodynamic interactions between the recovery bullet and GAV, and contact dynamics for airborne retrieval. Unfortunately, however, one of GAV units was destroyed during the flight tests.

“Airborne recovery is complex,” Calhoun said. “We will take some time to enjoy the success of this deployment, then get back to work further analyzing the data and determining next steps for the Gremlins technology.”

A fifty-two-second-long video of the successful midair recovery was posted to DARPA’s YouTube DARPAtv.

DARPA stated that safe, effective, and reliable air recoveries promise to dramatically expand the range and potential uses of unmanned air vehicles in conflict situations. GAVs could be equipped with a variety of sensors and other mission-specific payloads and could also be launched from various types of military aircraft, keeping manned platforms safely beyond the range of adversary defenses. After air retrieval, the GAVs can then be refurbished by ground crews to prepare them for another mission within twenty-four hours as noted in last month’s test flights.