DARPA Wants The U.S. Navy To Have A Fleet Of 355 Aircraft Carriers 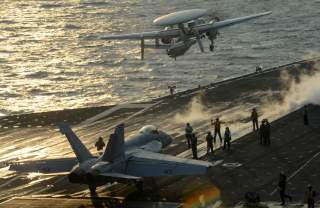 Key point: Tern would help the United States overcome this issue by greatly increasing the number of targets China or another U.S. adversary would have to strike in order to destroy America’s strike capabilities.

Zachary Keck is the former managing editor of The National Interest. He can reached on Twitter: @ZacharyKeck. (This first appeared in 2015.)