Data Drones? AT&T Wants to Use Drones to Provide 5G in Rural Areas 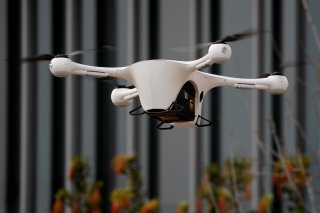 AT&T said last week that it has been testing a way to transmit 5G signals using a drone. It’s called the Flying COW (which stands for Cell on Wings), and the idea is to use drones to provide 5G coverage in rural areas of the country.

“We had intermittent, weak LTE signal at the flight location before we launched the 5G Flying COW,” Ethan Hunt, AT&T’s Unmanned Aircraft Systems (UAS) principal program manager, said in the announcement. “We flew the drone up to about 300 feet, turned on the signal and it began transmitting strong 5G coverage to approximately 10 square miles.”

One application is for use during wildfires or other emergency situations.

“Drones may use 5G for command and control or to stream video, but the AT&T 5G Flying COW® is the only drone that provides a 5G network,” Hunt added in the release.

The tech had previously been used at times for 4G/LTE signals, including during sporting events.

“Our focus within the drone world is connectivity. All of our drone solutions have that focus,” Art Pregler, Unmanned Aircraft Systems (UAS) Program Director, AT&T, said in the announcement. “5G brings a lot of new capability to the table. We can connect a lot larger number of devices with 5G. When we put that up, we can share with a larger population.”

He added that the company is working on more applications for the Flying COW when it comes to spreading fast and reliable 5G service to rural areas.

AT&T also produced a video of the Flying COW in action.

In other, less jovial drone news, the majority of the ethics board for Axon has resigned following a proposal last week by the company for “non-lethal armed drones” to be used for addressing school shootings.

According to Fast Company, that proposal “sparked concerns about privacy, safety, and potential abuses, and blindsided the legal experts, technologists and former police officials who sit on the Arizona-based policing giant’s 12-member ethics panel.”

“In light of feedback, we are pausing work on this project and refocusing to further engage with key constituencies to fully explore the best path forward,” Axon CEO and founder Rick Smith said in a statement. He added that the proposal last week was merely a suggestion, and not anywhere close to fruition.

“I want to be explicit: I announced a potential delivery date a few years out as an expression of what could be possible; it is not an actual launch timeline, especially as we are pausing that program. A remotely operated non-lethal TASER-enabled drone in schools is an idea, not a product, and it’s a long way off.”