Dating Is Difficult in the Era of Trump 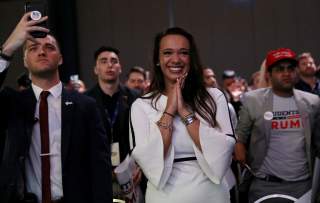 Former AEI President Arthur Brooks made an impassioned plea for Americans to excise contempt from our national debate at the annual National Prayer Breakfast. At the event, held only 24 hours after a contentious, divided Senate voted to acquit President Trump on two impeachment charges, Brooks challenged the audience to raise their hand if they had people in their lives who they loved despite their political differences. Nearly every hand “shot up,” leading Brooks to conclude that this is true for just about everyone: “I’m going to round that off to 100 percent.”

But when it comes to dating, loving your enemy is not so easy. The new January American Perspectives Survey finds that politics is creeping into our dating lives and relationships. Few Americans report any one particular issue is a dating deal breaker for them, whether it is abortion or climate change, but Trump has become difficult to avoid. A majority of the public (62 percent) say dating someone whose views of the president did not align with their own would be impossible for them.

Not all Americans are equally likely to say Trump is a factor in their dating decisions. Women, particularly Democratic women, are far more likely to refuse to date someone if they have differing views of the president.

Nearly eight in 10 (79 percent) Democratic women say they would be unwilling to date someone whose view of Trump contrasted with their own. For Republican men, Trump is much less of an issue. About half (52 percent) of Republican men say they would be willing to date someone even if they disagreed in their views of the president. Forty-eight percent say it would be a deal breaker for them.

In some ways, it’s not surprising that Trump has intruded into our dating lives. Through social media, nonstop news coverage, and a steady barrage of controversial comments, Trump has made himself an omnipresent feature of American public life. He has become nearly impossible to ignore. And compared to past presidents, Trump inspires very strong feelings — on both sides. The overwhelming majority of Americans report having strong feelings about the president. Seven in 10 Americans have a very favorable (26 percent) or a very unfavorable (44 percent) opinion of Trump.

Despite this, few Americans believe that political differences will necessarily doom a relationship. Americans believe that disagreements over finances and children are more pressing concerns for couples than politics. But Brooks cautions that — as many Americans already know and some are finding out — “the devil is in the details.”

Learn more: Partisan attachment: How politics is changing dating and relationships in the Trump era | Hidden identity: When Americans decide to keep their religious background to themselves | Public views of political compromise and conflict and partisan misperceptions

This story was first published in AEI.