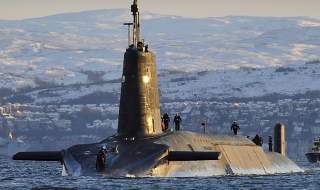 The solution to avoiding further collisions would be to coordinate sub patrols between nations to avoid operating in the same place at the same time—but that runs counter to the paranoid logic underlying ballistic missile patrols.

Curiously, the HMS Vanguard, a British Royal Navy nuclear submarine also experienced a collision that evening. The first of her class, the Vanguard measures 150 meters long and displaces 16,900 tons when submerged.