Dead in the Dark: How Good is Chinese Miltiary Grade Night Vision Gear? 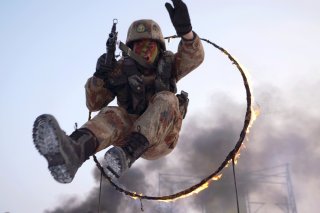 Recently, various Chinese military night vision units have been showing up on the Chinese domestic market. This provides an interesting opportunity to evaluate the capability of such units, as manufacturers publish the specifications and characteristics of these units. However, as with most night vision technology, there are caveats. Typically a night vision unit consists of two basic elements, the image intensifier (I2) tube, and the housing. The tube generally is the largest determinant of the quality and resolution of the image, while the housing affects how the unit is mounted, how durable it is, and its other ergonomic properties. While the housings available on the civilian market are fairly representative of Chinese military stock, the I2 tubes in the housings may not be representative of what’s actually issued to the Chinese military.

The BBG-011A is an interesting example of a Chinese military night vision unit on the civilian market. The unit is clearly a clone of the Thales LUCIE night vision goggles, a popular European NVG that has seen use with the German Bundeswehr and French Army. The LUCIE is notable for being relatively “flat”, having the form factor of a rectangular box with a lens in the upper right corner. The offset lens is controversial among users of the LUCIE, with users often complaining that the offset lens makes “close up” work unintuitive and clumsy. However, it’s possible that the lens is offset to interface well with carryhandle mounted optics on the FAMAS rifle, which makes sense given that the Chinese QBZ-95 is set up in a similar way.

The BBG-011A on the civilian market comes with one of three I2 tubes, the NT-3, CNT-4, and DNT-6. NT-3s have figures of merit (FOMs) of around 1200, CNT-4s have FOMs of around 1440, and DNT-6s have FOMs of around 1960. DNT-6 tubes also have autogating technology, which helps preserve tube life when bright light sources are viewed through the tube. All of the I2 tubes the BBG-011A is available with are Gen 2+, which is behind the Gen 3 tubes commonly used by the US military. Most US military NVGs have FOMs of over 2000, with some even going above 2500. Modern Generation 3 military-used Chinese tubes are probably over 2000 FOM, but are not seen on civilian-available examples, and would probably not be used in the BBG-011A, as it is an older design.

The BBG-011A has a dovetail mount which is proprietary. PLA standard operating procedure appears to be the mounting the BBG to a headclamp style mount, which a ballistic helmet is then worn over. This is not ideal, as headclamp mounts are generally considered to be uncomfortable, especially with a helmet worn over them. Adapters are available that allow the BBG-011A to be mounted on a standard Notoros Rhino or Wilcox L4G24 mount that American PVS-series night vision are generally mounted on.

Overall, the BBG-011A is an interesting look into Chinese night vision development. The choice to clone the European LUCIE device instead of American or Russian monocular-style devices is interesting, given that monoculars are generally held to have far more advantages over offset-lens binoculars. But perhaps the desire for passive-aiming capability through a reflex sight and the similarities in layout between the FAMAS and QBZ-95 rifles lead to the adoption of the BBG-011A.