Dead Drone: Are Iran and America Headed Towards a Bloody War? 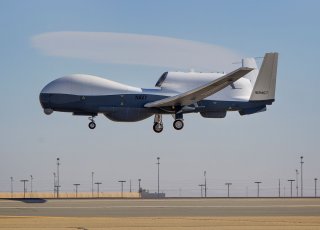 Deptula said the Pentagon must modernize its “geriatric air force with systems that have been designed to operate against high-threat capabilities like stealth fighters, bombers and [intelligence, surveillance and reconnaissance] aircraft.”

Northrop built four Broad-Area Maritime Surveillance-Demonstrator drones, based on the Global Hawk platform, for the Navy starting in 2008. The Navy has stationed two of them in the United Arab Emirates for operational use as it prepares to deploy the full MQ-4C naval version of the Global Hawk starting in late 2019.

Deptula said the Pentagon must modernize its “geriatric air force with systems that have been designed to operate against high-threat capabilities like stealth fighters, bombers and [intelligence, surveillance and reconnaissance] aircraft.”

“The presumption of being able to operate in permissible airspace is one that was legitimate over the last quarter of a century, but this shootdown demonstrates the consequences of operating against even second-rate military powers,” Deptula said.

U.S. Air Force U-2 manned spy planes, RC-135 manned electronic-intelligence aircraft, E-3 manned radar planes and RQ-4 and MQ-9 drones as well as Navy MQ-4s and P-8 patrol planes -- hundreds of aircraft, in total -- all are what the military calls “non-penetrating,” meaning they are vulnerable to high-end air defenses.