Dead Drones: How the Army Will Kill Any Enemy Unmanned Aircraft 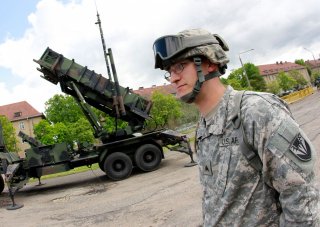 Lasers, interceptor missiles and electronic warfare are all fast-growing potential answers to a seemingly unstoppable increase in enemy drone attack technologies. Given the rapid pace of technological advancement, and the seemingly ubiquitous availability of drone technologies, the U.S. military is moving as quickly as it can to keep pace -- and stay in front of possible drone swarm attacks, close in drone-fired weapons and even instances wherein drones themselves become explosives.

Many Pentagon and U.S. Army medium, large and longer-range drone countermeasures have reached substantial levels of maturity, yet smaller vehicle attack drones, described as Group 1 to Group 3, present unique and still somewhat unresolved challenges. Drone swarms, for instance - such as commercially-available quadcopters - can be flown in groups to overwhelm radar systems, blanket areas with ISR or even themselves function as mini attack explosives or airborne IEDs.

In an effort to address this, the Army and Raytheon are now accelerating development and deployment of an upgraded counter-drone weapons system designed specifically to address close-in small drone threats. The integrated counter-drone system uses a Ku band mobile, 360-degree ground radar called KuRFS -- in conjunction with a suite of specific countermeasures, called effectors. KuRFS can provide threat information for ground commanders who can then opt to use laser countermeasures, EW, High-Powered Microwave weapons or a kinetic energy interceptor missile-drone called Coyote Block 2. However, before any threat can be destroyed, it must first be identified or “seen.”

KuRFS began as an Urgent Operational Need request from the Pentagon to address an immediate and pressing need to counter enemy drones, rockets, mortars and other airborne threats -- including lower flying helicopters, Raytheon developers said.

The now-deployed system, called Howler, uses KuRFS in conjunction with each of these potential effectors, including a Coyote Block 1 interceptor. Now, Raytheon has engineered a new, upgraded Coyote Block 2 effector with improved guidance, sensing and warhead technology.

McGovern described Block 2 as a “larger, optimized warhead with improved tracking detection, engine performance and warhead effectiveness.” . Equipped with an advanced seeker and small warhead, Coyotes can launch from a range of locations, including fixed locations and armored vehicles on-the-move. While already in development with the U.S. Army, Coyote Block 2 has just been approved for international sales, as part of a strategy to help U.S. allies combat the growing small drone threat.

While preparing to upgrade Howler with the Coyote Block 2, Raytheon and the Army are emphasizing new innovations, such as the application of AI and Machine Learning. The Coyote Block 2 system is already integrated into an elaborate command and control system tasked with organizing and transmitting time sensitive threat data for human decision makers under attack. Raytheon developers tell Warrior the firm is looking at some of the next steps with “data fusion,” involving the use of AI to analyze fast arriving data from otherwise disparate sensor systems to optimize the delivery of crucial decision-informing combat data.

By comparing approaching threat information against a vast database of compiled information, AI-enabled algorithms can perform the real time analytics necessary to determine and present course of action options to a human decision - maker -- in a nearly instantaneous fashion. For instance, AI and Machine Learning programs can analyze arriving threats against previous occasions wherein drones were used to attack in a variety of ways, factoring a wide array of variables such as previous speeds of approach, swarm techniques, weapons used and navigational factors such as weather obscurants or terrain details. Naturally the use of AI would be used to fortify or supplement human decision-making, as it would not be able to replace human cognition or decision-making faculties. Also, Pentagon doctrine specifies that a human is of course always going to be in the loop when it comes to decisions about the use of lethal force.

Therefore, by receiving and quickly analyzing electronic return signals or “pings” from a KuRFS radar, AI-empowered command and control applications could instantly present commanders with optimal response options such as which effector, or “kill method” would be best. Perhaps weather complications would make a laser interceptor less effective? Perhaps an attack over an urban area would prevent an option to use “kinetic” or explosive defenses -- given how fragments or debris could present risks to nearby civilians? Perhaps the use of EW weapons or High-Powered microwave might be the optimal method to jam or disable approaching drone swarms, or interfere with the seeker or guidance system used by attacking aircraft? Lastly, so-called kinetic options, such as a Coyote Block 2 interceptor weapon, could directly intercept and explode an approaching drone or use a proximity fuse for an “area” explosive effect to knock out small groups of drones.

All of these potential scenarios require the merging, analysis and organization of threat-specific sensor data - precisely presenting the kinds of predicaments AI applications could perform for humans -- at lightning speed. Ideally, Machine Learning technologies could receive and integrate previously unseen threat specifics of great relevance, merging them with existing data, performing near real-time analytics and rendering organized options for human commanders.

Integrating accumulated sensor data can, according to the essay, pinpoint optimal sensor applications specific threat scenarios. Precision renderings generated by KuRFS could quickly be fortified by Electro-Optical/Infrared sensors, laser ISR, acoustic applications or radio (RF) signals. Furthermore, attributes of one sensor can compensate for limitations of another, creating what Raytheon developers describe as a “common operating” picture.

For instance, electro-optical cameras could bring additional detail to some of the electronic returns provided by KuRFS’ use of Doppler radar technology, an application which captures and analyzes speed, movement and other target-relevant details.

“The intrinsic movements of the targets could describe the rotation of rotor blades of a rotary wing UAV or of a helicopter, the propulsion turbine of a jet, the flapping of the wings of a bird, and can be statistically described by the radar m-D (Micro-Doppler) signature,” the NIH essay states.

The essay further elaborates by stating that, for instance, radar might bring excellent precision detection, visual cameras could further distinguish target information and thermal sensors could, for example, detect the “heat signature” coming from an enemy drone’s engine.

Raytheon developers explain that these kinds of data-fusion techniques are strengthened by the kinds of AI-centered innovations now being worked on by its scientists and engineers. The direct and near-term implications for the c-UAS mission are being addressed real-time by Raytheon, accelerating and improving KuRFS-Coyote synergy for the U.S. Army and a growing number of allied international customers.

Therefore, it is no surprise that quickening the detection and processing functions continues to command the attention of Army Futures Command’s Artificial Intelligence Task Force.

“It is about enabling and speeding-up what you can recognize in the battlefield to help a soldier who might normally have to sift through intelligence data and look for cues to get the right targeting information,” Lt. Col. Chris Lowrance, autonomous systems lead, Army Artificial Intelligence Task Force, told reporters last Fall at the Association of the United States Army annual symposium.

Speed, developers say, is key in several respects. Not only is it fundamental to sensing and thwarting drone attacks, but production and development “speed” can bring much-needed technology to war.

“We rapidly turn around prototypes. Speed is critical for us right now,” McGovern said.

“Without speed, simply put, U.S. weapons developers risk falling behind the threat, given the pace of technical advancement. The pace of technical change, and its implications for attack drones, is well captured in a 2017 Essay in an Air and Space Power Journal called “AIR MINES: Countering the Drone Threat to Aircraft.”