Dead Stealth: What Happens if Fighters Like the F-35 Are Obsolete? 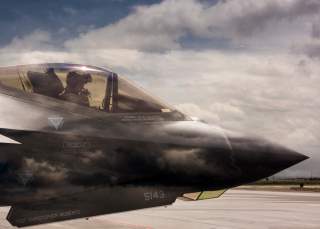 At a recent US Air Force Association conference, Elon Musk, creator of the SpaceX reusable rocket, told thousands of fighter pilots that ‘the fighter jet era has passed’. This declaration on the future of unmanned autonomous systems from one of the world’s most innovative thinkers generated a lot of debate, but it isn’t entirely correct.

Rather than crewed aircraft being replaced completely by unmanned systems, we’ll see a partnership of piloted and autonomous systems. The unmanned aircraft will have various levels of trusted autonomy depending on the operational and tactical circumstances they operate in. For the Royal Australian Air Force, getting this manned–unmanned teaming right is vital if we’re to sustain our operational effectiveness in the face of growing threats.

The starting point for the RAAF must be filling the long-range strike gap that has opened up since the retirement of the F-111C in 2010, and which the acquisition of the F-35A has failed to fill. The problem, as I’ve noted before, and as my ASPI colleague Marcus Hellyer has explored, is a lack of range and payload in the RAAF’s strike and air combat platforms. RAAF aircraft can project power at long range, but only with extensive tanker support in uncontested airspace, or by using another nation’s bases. Neither of those options may be available in a conflict.

So, it’s opportune that Boeing is working on linking manned and unmanned aircraft with the loyal wingman ‘airpower teaming system’. The loyal wingman drone offers the possibility of a low-cost long-range light-strike platform that can operate alongside the F-35A, the Super Hornets and the Growler electronic warfare aircraft. It would support larger enablers such as the E-7A Wedgetail airborne early warning and control aircraft.

The loyal wingman is a small platform with a maximum flying distance of around 2,000 nautical miles, which translates roughly to an unrefuelled combat radius of 660 nautical miles (1,200 kilometres), depending on payload and mission profile. It has high subsonic speed but isn’t supersonic and has a limited payload. Boeing is aiming to fly this aircraft this year, and it could be acquired in significant numbers later in the 2020s if the RAAF wants it.

The loyal wingman could transform Australia’s defence industry and possibly the Australian Defence Force. It should be seen as the first of a family of systems to address critical defence needs. Step 1 would be to speed its introduction into service to support the RAAF’s air combat capability. The RAAF can learn to build, operate and sustain these systems to help redress the imbalance in capabilities it could face.

This platform could be developed into new designs with greater size, performance and payload, perhaps midway between the F-111C and a larger bomber.

With China working on a ‘J/H-XX’ ‘regional bomber’, a scaled-up loyal wingman could be an answer not only for the RAAF’s long-range strike gap, but also to fill similar gaps in the US’s and other regional partners’ air forces, which have for too long emphasised tactical platforms rather than long-range strategic airpower.

That could open up the possibility of crewed RAAF fighters being supported by a long-range stealthy unmanned ‘missile truck’ carrying advanced very long-range air-to-air missiles such as the AIM-260  to boost long-range air defence capability. Alternatively, it could deliver hypersonic land-strike weapons and advanced anti-surface weapons, such as the AGM-158C long-range anti-ship missile (LRASM), that can strike land and sea targets far beyond the sea–air gap.

Boeing could also develop the MQ-25 Stingray so that it could refuel both the F-35A and loyal wingman. At the moment, the MQ-25 can only refuel navy and marine corps F-35Cs and F-35Bs, so a larger, land-based version is needed to allow longer-range stealthy operations by RAAF F-35As. That should be of great interest to the RAAF. The RAAF’s KC-30 MRTT tankers paint a massive signature on Chinese radars watching from the South China Sea and can’t operate in contested airspace. That limits the F-35A’s utility for long-range air operations.

Unmanned systems are eminently evolvable and lend themselves to experimentation and spiral development. They’ll be central to the US Air Force’s ‘Digital Century Series’ initiative and its Next-Generation Air Dominance, or NGAD, project, which aims to produce multiple different types of air combat platforms, manned and unmanned, over a short timeframe. Australia should fully participate in developing the baseline and proposed evolved versions of the loyal wingman.

Australia needs to embrace a bold vision for a larger, more powerful strategic air force in the 2020s. We also must develop that future airpower in a joint context. How naval capabilities such as the Hobart-class air warfare destroyer and Hunter-class frigates contribute to control of the air needs to be factored into future planning. Unmanned or optionally manned surface vessels for the navy could serve as ‘arsenal ships’ to enhance defensive and offensive firepower. Add in land-based capability, including long-range land-based strike, and some radical new force structure choices begin to emerge.

The starting point must be in the air. We must move away from the traditional boutique air force constrained by limited numbers of short-range tactical crewed platforms. Our emerging strategic outlook, in which long-range Chinese standoff capabilities could dominate our region, demands a different answer. A mix of manned and unmanned air capabilities acquired in cooperation with the US NGAD project could expand the RAAF’s strike and air combat forces and enhance their long-range strike and defence capabilities. Musk may be right, ultimately, and more distant future airpower may well be primarily unmanned. But, for the foreseeable future, it’s a partnership.

Malcolm Davis is a senior analyst at ASPI. Image: Department of Defence.