Dead: Why No One Wanted to Use Italy's Horrible World War II Tanks 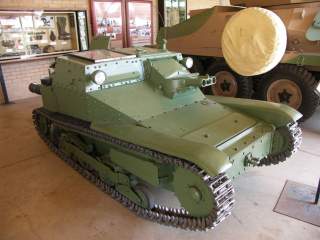 Key point: Rome had many dreams, but it never had the ability to fulfill them. This was a good thing too and Italy's bad tanks would limit its conquests.

Mussolini entered Italy into World War II on June 1940, hoping to ride on the coattails of Nazi German conquests. Il Duce had grand visions of a Roman Empire reborn, but his clumsy opportunism would result in the destruction of his Fascist regime in three blood-soaked years.

In addition to disastrous operational leadership, Italy’s immature industrial base relegated the Army and Air Force to fielding outdated or deficient equipment during the early years of World War II such as CR.32 biplane fighters and jam-prone Breda machineguns.

Particularly in armored warfare, a series of extraordinary defeats in the winter of 1940/1941 earned the Italian military a reputation it struggled to live down despite later improvements in technology and tactical-level leadership.

Italy had not deployed any tanks into combat World War I, but in 1919 it acquired a license to build a domestic spinoff of the ubiquitous French FT-17 light tank called the Fiat 3000. The first one hundred or so were armed with twin 6.5-millimeter machineguns, while the last fifty 3000B models received a small, low-velocity 37-millimeter cannon.  Fiat-riding Italian tankers first saw combat battling Libyan Senussi tribesmen in 1926.

Next the Italian Army chose to focus on the even more diminutive, turretless “tankettes” dubbed Carro Veloce (“Fast tanks”) with a maximum speed of twenty-six miles per hour.  After importing a few dozen Carden Loyd tankettes from the UK, manufacturer Ansaldo proceeded to build over two thousand domestic two-man CV-33 and CV-35 tankettes, armed either with machineguns or a flamethrower.

The tankettes were also hit on the export market, with L3s exported to and used in battle by China (more than twenty), Greece, Hungary (sixty-five), Iraq (sixteen) and Spanish Nationalists (ten), among other clients.

The Italian Army figured the tankettes were all it needed to fight colonial wars.  Around five hundred tankettes and Fiats, backed up by air power and mustard gas, featured prominently Mussolini’s rapacious invasion of Ethiopia in 1935.  But short-ranged (only sixty-eight miles!) armor exhibited middling performance at best.

In the battle of Dembeguina Pass in December 1935, a platoon of six CV/35 tankettes escorting convoy was overrun by a force of two thousandEthiopian fighters led by Leul Ras (“Duke”) Imru Haile Selassie.  The irregular fighting force managed to flip over, immobilize and/or set on fire all of the tankettes and even lured a crewman out who was beheaded with a sword.

A year later, the Italian Army dispatched the first of 155 tankettes into the Spanish Civil War from 1936–39, only to discover that its machinegun-armed “sardine boxes” (as they were nicknamed) stood no chance against cannon-armed Soviet T-26 and BT-5 tanks.  A dozen were knocked out by 45-millimeter shellfire at Guadalajara in a failed advance on Madrid.

The tankettes had only fourteen millimeters of armor and also proved vulnerable to close infantry assaults, a fact immortalized in final chapter of Ernest Hemingway’s For Whom the Bell Tolls. There were fifty-three tankettes lost from 1937–38, though they did experience some battlefield successes.

Finally Italy began building 11-ton M11/39 “medium” tanks in the summer of 1939 with a 37-millimeter gun in the hull and twin machineguns in the turret, all operated by a three man crew. One of the first tanks to use a diesel engine, the M11/39 125-horsepower engine proved underpowered and prone to over-heating, limiting the vehicle to no more than twenty miles per hour.  The M11/39 also lacked a radio, and was highly unreliable.  Only one hundred were produced in 1939–40 at a slow rate of nine per month.

In 1940, the 13-ton M13/40 tank with a four-man crew introduced a capable 47-millimeter gun in the turret that could penetrate most contemporary tanks. However, the M13 remained mechanically unreliable and struggled to perform in the hot climate of North Africa. Around seven hundred M11/40s followed by eight hundred similar M14/41s with an improved engine were eventually churned out.

Initial Italian armor actions in southeastern France went poorly, with L3 tankettes disabled by mines, immobilized by barbed wire, and destroyed by French fortress artillery. Italy’s ill-advised invasion of  Greece didn’t go super well either—of 163 Iight tanks in the Centauro division for the campaign, only ninety were operational and thirty were captured in a Greek counterattack in December 1940.

In distant East Africa, however, the 321st and 322nd tank companies with twenty-four M11/39 tanks between them performed well during the Italian invasion of British Somaliland, outmatching British light tanks in Kenya. As British reinforcements poured into the theater, however, both units were destroyed by May 1941.

It was primarily in North Africa, however, that Mussolini’s Italy would see its fortunes broken, starting with an ineffectual attack by Italian forces in Libya on British colonial territories in Egypt.

A small-scale British counterattack in December 1940 dubbed Operation Compass proved successful beyond all expectations. On December 9, British troops surrounded, surprised and overran around two dozen M11/39 tanks of Maletti Group while they were encamped at Nibeiwa.

Then in the battle of Bardia in January 1941, 115 Italian tankettes and thirteen M11/40 tanks proved completely incapable of scratching the ponderous, thirty-ton Matilda II heavy tanks fielded by the British Army, though they did manage to overrun  British infantry battalion before many were knocked out by two-pounder anti-tank guns. To be fair, no country then fielded a tank that could truly penetrate a Matilda’s 78-millimeter frontal armor.

Mechanical unreliability also wreaked atrocious losses: after one thirty-seven-mile road march, only seven out of 39 M11/39s remained fully functional. By the January, 1941 all seventy-two M11/39s in Libya had were destroyed, broken down or captured.

“A” Squadron of the 6th Australian Division Cavalry Regiment actually adopted captured M11/39 and M11/40 tanks to supplement their Universal Carrier APCs, painting them over with White Kangaroo emblems . The Aussies used them in the first tank action ever by the Royal Australian Army when they assaulted Italian defenses at Tobruk, though only seven of the tanks managed to complete the approach march without breaking down.

A few months after Bardia, the Italian 10th Army under General Guiseppe Tellera began retreating westward down the Via Balbi coastal highway from Benghazi, Libya. A small British flying column dubbed Combeforce raced ahead down the Ajdabiya road and managed to cut off the escape route at the town of Beda Fomm on February 5—arriving only minutes before the Italians.

On February 6, Combeforce was reinforced by a few dozen Mark VI light tanks and Cruiser cavalry tanks of the 4th Armored Brigade. These fended off piece meal attacks by a hundred M13/40s of the Babini Group, popping up from behind hills to knock out over half the M13s, though the British tankers took a few lumps in return. A lack of familiarity with the M13/40, which was new at the time, hampered Italian performance.

On February 7th, the last thirty M13s were flung at Combeforce in a final effort to clear an escape route for the 10th Army. The Italians managed to knock out eight out of the nine truck-mounted anti-tank guns used by the British defenders. However, famously “the battery commander, his batman, and a cook” manned the last gun and knocked out one more M13 as it approached a makeshift officer’s mess.

These spectacular defeats cemented a reputation for incompetence in the Italian military. But in reality, both Italian tankers and their armored mounts would improve significantly over the next two years to the dismay of Allied units expecting a cake walk, as detailed in a companion article.