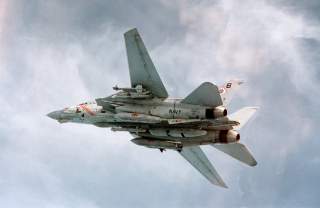 When it debuted in 1974, the Grumman F-14 Tomcat was supposed to replace the McDonnell Douglas F-4 Phantom II in U.S. Navy service. This replacement occurred gradually, meaning Tomcats and Phantoms flew alongside each other for another decade.

They also flew alongside each other in the Islamic Republic of Iran Air Force. Together, the “turkeys” and “rhinos” battled Saddam Hussein’s air warriors during the Iran-Iraq War, cementing an enduring partnership that continues today.

After years of flying together on the same side of the battle lines, the Tomcat and Phantom eventually wound up facing off against each other on Aug. 8, 1987. It was also during this confrontation the United States would fire its first shots in anger against Iran.

Just a few weeks earlier, the United States had commenced Operation Earnest Will. After years of attacks on merchant shipping by both Iran and Iraq, Kuwait had requested protection for its vessels as they transited the Persian Gulf from and to destinations abroad.

The United States intervened and accepted the responsibility of safeguarding the Kuwaiti tankers, escorting the first convoy on July 24, 1987 and the final convoy of Earnest Will on Sept. 26, 1988.

The escort operation was the beginning of deeper American military involvement in the Persian Gulf. Increasingly substantial levels of air and naval power were deployed to the region, with an aircraft carrier battle group positioned just outside the Gulf in area referred to as “Gonzo Station.”

Since early summer, Battle Group Delta, centered on USS Constellation and Carrier Air Wing 14, was on-station at Gonzo in the Gulf of Oman and had been providing air cover for Earnest Will since the first convoy on July 24.

From the start, Iran engaged in provocative actions towards the operation. On July 24, 1987, four IRIAF F-4s came within 15 miles of the convoy and were warned off by F-14s. A separate incident earlier in the summer had almost resulted in F-14s firing at approaching Iranian fighters. It seemed only a matter of time before a major clash erupted.

Matters nearly came to a head on Aug. 8. That morning, a convoy of three tankers was to transit the Strait of Hormuz en route to Kuwait. They were escorted by the destroyer Kidd and the frigates Jarrett and Crommelin. The Aegis-equipped cruiser Valley Forge, normally tasked with guarding Connie in the Gulf of Oman, would also participate in the escort during the Strait transit.

Monitoring the convoy up above was a specially-equipped Lockheed P-3C Orion. Designed as anti-submarine platforms, the Orions flying from Oman were part of a special projects program with the code name “Reef Point,” and flew reconnaissance and surveillance missions in support of Earnest Will.

In addition to visual and electronic monitoring of Iranian military activity, the Reef Point aircraft were now also searching for any indications of Silkworm missiles launches.

As the convoy transited the Strait, Valley Forge and a Grumman E-2C Hawkeye airborne early warning plane detected two aircraft taking off from Bandar Abbas. Based on their air base of origin, speed and altitude, the contacts were apparently F-4s. They appeared to be heading straight for a southbound P-3 that had its back to the Iranian fighters.

Numerous radio challenges from Valley Forge went unheeded. Though the Orion was under fighter escort, they could not leave the defenseless P-3’s side, so the Hawkeye vectored two F-14s flying combat air patrol on the eastern end of the Hormuz strait to intercept.

The two F-14s were of the A-variant and operated by Fighter Squadron 21. The flight lead was Lt. Cmdr. Robert Clement and his wingman was Lt. William “Bear” Ferran. It was Ferran’s radar intercept officer who initially made contact with the IRIAF fighters, detecting them on the Tomcat’s powerful AWG-9 radar at a range of 35 miles.

Given his better radar return, Ferran was handed flight lead by his more senior wingman. Ferran attempted to visually acquire the Phantoms via the F-14’s Television Camera System, but the Gulf’s notorious haze made it impossible.

Meanwhile, the two sides were closing fast, with the rules of engagement dictating the U.S. fighters had to wait until the Iranian bogeys were within 10 miles before firing.

Ferran recalled the tension mounting inside the cockpit of his F-14 in the book Wings of Fury. “He just keeps coming. The range is decreasing … It’s not, well, frantic at this time, but just, people wanted to know, ‘Hey, it looks like this is really going to happen. What do you want us to do?’”

With the Phantoms still bearing down on the P-3 at 10 miles, the Navy pilots were convinced the bogeys were now “bandits” – an air-to-air threat. Ferran took the initial shot at one of the F-4s with an AIM-7 Sparrow medium-range missile.

But the missile malfunctioned off the rail and free-fell into the water below. Clement fired a Sparrow immediately after, followed up by another missile from Ferran. Both missiles appeared to guide toward the target.

After seeing what he believed to be a missile’s detonation, Clement called for a “break turn” away from the Phantoms and proceeded to bug out. For a moment, this seemed a dangerous move, as the F-14s had turned their backs on at least one F-4 that could still shoot them.

The Tomcats scrambled to lower altitude, releasing chaff and flares along the way to foil any attempt by the Iranians to attack them. The day proceeded with no further incident, as the Iranian contacts appeared to return to base and the P-3 was able to continue its mission without incident. The F-14s eventually returned to Constellation.

To this day, it remains unclear whether the Tomcats’ missiles ever found their target. Because the U.S. fighters turned away and escaped after the reportedly witnessing a detonation, there was no way to confirm a hit or a kill. In fact, the incident is noteworthy given that visual identification was never established and there is lingering doubt as to whether the radar contacts constituted Iranian F-4s or something else.

As historian David Crist uncovered through research, senior officers analyzing the incident concluded the track was actually an Iranian C-130 flying surveillance and, therefore, posed no threat to the American P-3, let alone any other aircraft or ship.

Almost 20 years after the incident, however, a controller who had been aboard the E-2 that had vectored the F-14s to intercept told Crist “there was no mistake that it had been an F-4,” but that there had been a C-130 in the air at the same time, as well.

The Iranians apparently had nothing to say about the incident, either. As news of the incident broke back home, the Reagan administration downplayed the engagement, concerned about the potential for escalation.

To this end, officials spoke of the incident, while never explicitly confirming its occurrence, either, with Press Secretary Marlin Fitzwater referring to it as “the incident I’m not confirming.” Other officials went as far as suggesting the radar contacts were not Iranian or were not even aircraft to begin with.

If the latter theory were true, it would, ironically, confirm that the F-14s had indeed encountered “phantoms” that August day in the summer of ’87.