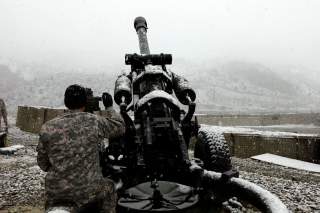 (Washington, D.C.) Enemies hiding under a bridge, bunkered down on a specific floor in a large building, seeking cover on the back side of a mountain ridge or moving to attack in an armored vehicle convoy --- are all now more vulnerable to U.S. strikes due to an emerging laser-guided artillery round that can destroy enemy targets on the move in combat.

“The Russians are using their most advanced tanks in the Ukraine, including the T-72B3, T-80, and T-90. All of these tanks have 125mm guns capable of firing a wide range of ammunition, including anti-tank/anti-helicopter missiles with a six-kilometer range, and advanced armor protection, including active protection on some models,” the strategy writes.​

Interestingly, metallurgical exploration and development was specifically cited by Martin as an area of modernization emphasis.

ERCA, and the possibility of an Excalibur S, change the Army’s land war strategic calculus in a number of key respects, by advancing the Army’s number one modernization priority – long-range precision fires. This concept of operations is intended to enable mechanized attack forces and advancing infantry with an additional stand-off range or protective sphere with which to conduct operations. Longer range precision fire can hit enemy troop concentrations, supply lines and equipment essential to a coordinated attack, while allowing forces to stay farther back from incoming enemy fire.