The Deadly F-15 Just Got Deadlier 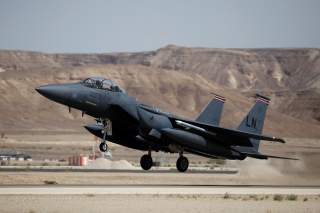 The Air Force is arming the F-15 with new weapons to better prepare the decades-old fighter for modern combat challenges and near peer rivals - giving the jet an ability to fly into the 2040s and track and destroy enemy targets at further ranges under a wide range of combat conditions.

“The Air Force plans to integrate improvements for the AIM-9X and Small Diameter Bomb II on the F-15 over the next several years,” Capt. Emily Grabowski, Air Force spokeswoman, told Warrior Maven.

Air Force officials say the F-15 could be fully armed and operational with the SBD II as soon as this year.

While the Air Force currently uses a laser-guided bomb called the GBU-54 able to destroy moving targets, the new SDB II will be able to do this at longer ranges and in all kinds of weather conditions.

The Air Force currently operates roughly 400 F-15C, D and E variants – and plans to keep the aircraft flying into the 2040s.

The new weapons are part of a larger F-15 sustainment and modernization overhaul which is integrating new sensors, targeting, electronic warfare systems and radar as well.

Improved radar is a key component to the weapons upgrades, as it enables improved threat detection and targeting against technological advanced adversaries – such as a Chinese J-10.

All of these adjustments are part of the Air Force’s service life extension effort now underway.

“Full-scale fatigue tests for both the F-15C/D and F-15E are in progress. Final results are still pending, expected to be completed in the 2020 timeframe and will be one of many data points used to assess the size and scope of a possible F-15 service life extension program,” Grabowski said.

The SDB II is built with a two-way, dual-band data link which enables it to change targets or adjust to different target locations while in flight, Raytheon developers have told Warrior Maven.

Engineers are also working on plans to integrate the bomb onto the F-35, F/A-18E/F Super Hornet and F-16 as well, Raytheon officials said. The Air Force is already testing the F-35 with the SDB II.

A key part of the SDB II is a technology called a “tri-mode” seeker — a guidance system which can direct the weapon using millimeter wave radar, uncooled imaging infrared guidance and semi-active laser technology, according to Raytheon information.

A tri-mode seeker provides a range of guidance and targeting options typically not used together in one system, Raytheon weapons developers explain.

Millimeter wave radar gives the weapon an ability to navigate through adverse weather, conditions in which other guidance systems might encounter problems reaching or pinpointing targets.