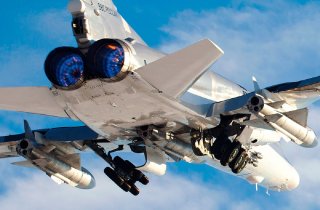 The skies over the neutral waters of the Barents and Norwegian Seas were a little more crowded this week as two Russian Tupolev Tu-22M3 missile-carrying bombers were "shadowed" by F-16 fighters of the Norwegian Air Force Russia's Defense Ministry reported.

The Russian news agency Tass reported that the bombers' flight lasted more than four hours, and sorties such as this one are regularly performed by Russia's long-range aircraft over the neutral waters of the Arctic and Pacific Oceans, as well as over the Baltic and Black Seas. All the flights "are performed in strict compliance with the international rules of using the airspace, the ministry noted.

The Tu-22M3 bomber has been seen as the face of the Russian Air Force throughout the world. In addition to its patrol roles, it has been used to drop bombs over Syria. Last year the issue of how the Tu-22M3 is controlled under the New START treaty has been debated – as it could be considered a strategic "heavy" bomber. While it hasn't been flying missions as long as the American B-52, the Tu-22M has been taking to the sky for a considerably long time, going back to the early 1970s.

The Tupolev Tu-22M3 isn't the only Cold War-era warbird from the Russian Air Force seen in neutral waters in recent days. Two nuclear-capable Tu-160 strategic bombers were also spotted over the Baltic Sea, which prompted Finland, Sweden, Poland, and Denmark to scramble fighter jets to shadow and escort the bombers. At certain stages of the Tu-160s' route, the long-range aircraft were accompanied by Finland Air Force F-18 fighters, F-16s from Poland, and Saab JAS 39 Gripen from the Swedish Air Force. It is not clear what type of aircraft the Danish Air Force had used.

The Tu-160 – the largest, heaviest, and fastest bomber ever built – can carry up to 12 short-range nuclear missiles, and during this week's patrol, the two Russian bombers were in the air for eight hours.

Such flights into neutral waters and airspace have become increasingly common. Last May, four Tu-95MS strategic missiles carriers conducted sorties over the Chukotka, Bering and Okhotsk seas, as well as along the western coast of Alaska and the northern coast of the Aleutian Islands. The entire flight with the Cold War-era four-engine turboprop-powered strategic bombers lasted some 12 hours, during which time the Russian aircraft were escorted by United States Air Force F-22 fighter jets.

Mainland Alaska and mainland Russia are only some 55 miles apart, making such incidents far from unprecedented.