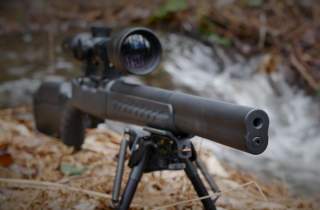 THE NEWCOMER: THE MARLIN XT-22

A new rifle with a similarly modern sounding name, the XT-22 is one of Marlin’s most recent offerings in the .22 caliber, and is designed to show off some new ideas when it comes to these guns. Since going on sale in 2011, this rifle has become hugely popular because of its straightforward design and accuracy.

Though the XT-22 is essentially just a conventional bolt gun, it’s a great one. Every part of the weapon is well made, from the precisely machined action to the ergonomic stock.

The standard version of this stock is walnut, and this looks great, although it is also possible to get this weapon with synthetic stocks that are more hard wearing and also available in camo.

The XT-22 can be ordered with a variety of different magazines, both removable and tubular. To my mind, the one to go for is the seven-round box magazine, which is legal in all states and provides enough capacity for hunting trips.

The micro-rifling on this gun also makes it very accurate. This type of technology is becoming standard on Marlin .22 rifles nowadays, and it is not hard to see why – it makes these guns lethally accurate, and greatly improves their performance as hunting rifles.

While it is possible to get more accurate rifles than the XT-22, they are going to cost you a lot more money than this rifle, and you will only be able to take advantage of the extra mechanical accuracy if you are an amazing shot anyway.

In summary, this is also a great rifle, yet to prove itself in the field and yet showing all the signs of being a classic one day. If you are looking for a simple, dependable bolt action .22 rifle, this is the one to go for.

THE OLD TIMER:  THE MARLIN GOLDEN 39-A

When I say old timer, I really mean it – the 39-A’s claim to fame is that it is the oldest continuously produced long gun in the world. It was designed, in fact, way back in 1891, and has remained a popular hunting gun ever since.

This ongoing popularity is partially due to the distinctive, Western-style design, but also because this gun is still a very practical hunting weapon. It’s a lever action, and actually based on an even older design – the iconic Winchester 1873.

There is something deeply satisfying about lever actions like this, and the extra muscle power required to move them actually means that guns like this are less prone to jams than those with other types of action.

The tubular magazine of the 39-A will hold 19 rounds of .22 LR, more than enough for most hunting trips. The design of this magazine is as old as the rifle itself, and as a result reloading this weapon can be a little tricky until you get used to it.

The barrel is a full 24 inches, giving good accuracy, and the rifle is surprisingly adaptable for such an old design. The receiver is tapped to accept scope mounts, so you can still use your high-tech optical system on a gun which is more than a century old. That said, the iron sights on the gun are pretty good in themselves.

Another amazing feature of the 39-A is that it can be completely taken apart with just a coin. If you are looking to get a rifle to teach your kid about guns, then look no further.

The design of the 39-A is such that even the most inexperienced gun smith can see precisely how the weapon works, and you will be able to fix and modify this weapon no matter your level of knowledge.

In addition, the classic American look of this rifle makes it a true classic. It is more than capable of pest control and at taking small game when out hunting, but is also simply a fun gun to go plinking with in the back yard.

THE PROFESSIONAL OPTION: THE MOSSBERG 715 TACTICAL

A very different weapon from those I’ve mentioned above, this is an AR-15 replica with a pretty standard .22 body hiding underneath. To tell you the truth, I’ve never been a huge fan of this kind of weapon, because I simply think it is silly for a weapon to pretend that it is something it is not.

However, and as several of my friends have pointed out to me, having a .22 based on an AR-15 is actually pretty useful for some people. Many people are so used to shooting an AR-15 that it makes sense to use the same skills when shooting a smaller caliber.

And as far as AR-15 style .22 rifles go, this is one of the best. Not only does it look the part, but it is a reliable an accurate weapon that is not so expensive. This .22 is designed to look and feel like a M16 assault rifle, even down to the dummy cocking handle.

While I would never recommend using this weapon to practice your AR-15 shooting – the experience of shooting both could not be more different – this is a gun that is easy to pick up and shoot, and makes quick work of pest control and hunting.

In addition, it offers a huge potential for modification. There is a short rail on the handle, and four long ones on the RIS front-end. This means that you can fit almost any military-style kit you want to this rifle, so if you want to mount your night vision sights on a .22 rifle, this is the one to go for.

Overall, despite my personal feelings about replica guns, I have to admit that this is actually a really good .22 rifle. The AR-15 is a great gun to handle, after all, so it makes sense that a .22 based on it would be similarly easy to shoot. If you are looking for a .22 rifle that is simple and reliable, this is a good choice.

THE LUXURY OPTION: THE ANSCHUTZ 1416 HB

Wow. The German company Anschutz have a good reputation for producing extremely accurate weapons, and this item is no different. While a little bit more expensive than some of the other rifles I’m recommending in this article, the build quality of this rifle means that it is a serious contender.

Everything about this rifle has been designed to maximize accuracy. It is built around a classic bolt action which feels incredibly sturdy, and the barrel is a rugged 18-inch affair.

In comparison to the American-style rifles I’ve covered above, here you get a magazine with only four rounds. While this may seem a bit stingy to some of you, this is a serious gun for skilled hunters who only plan to take one shot.

The receiver here is similarly well built – it looks and feels very solid, and inside there is a miniature Mauser bolt. Though there are no iron sights fitted as standard, Anshutz can supply them.

That said, the accuracy achievable with this weapon is such that it is crying out for an advanced optical system to be fitted. When combined with the bipod that is also available, you should be able to place your shots on a pin head with this weapon.

Of course, the downside of all of this engineering is the price. This gun takes what is good about the other .22 rifles I’ve mentioned, and takes it to a new level, and this does not come cheap.

Remember, however, that with this rifle you are investing in the best build quality there is, and also in a gun that will last many generations if you look after it.

No guide can ever tell you which .22 rifle to get, of course. As the most popular caliber in the US today, .22 rifles are used for such a variety of purposes that what you need in your gun will depend on what you plan to do with it. Another option is to get an air rifle, or you could even go with a slingshot if you wanted to.

That said, any of the rifles I have recommended above should serve most peoples’ needs pretty well.  Any of these guns will be able to take down small game, as long as you put in the practice yourself. Beyond that, you need to consider how much you are willing to spend on a .22 rifle, and how accurate you need it to be.

For those looking for a .22 rifle to teach their kids about shooting in the back yard, or even for occasional hunting trips, a cheaper .22 rifle like the Marlins I’ve mentioned should be more than enough.