Death From Above: The Air Force's Fearsome AC-130 Gunship Is Getting Upgrades 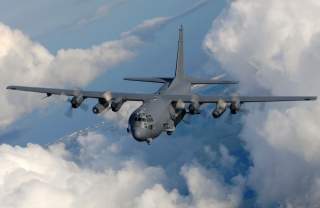 Key Point: Once the gunship is upgraded, the AC-130 will become an integral part of U.S. overseas operations.

The historic, lethal and combat-tested AC-130 gunship -- known for attacking ISIS and Taliban fighters during close-air support high-risk combat missions -- is getting a massive technological upgrade with newer weapons and avionics to increase the effectiveness of the attack platform and extend its service life into future decades, service officials said.

Early variants of the AC-130 gunship first entered combat in the late 1960s during the Vietnam war. Later variants served in the Gulf War, War on Terror and war in Afghanistan, among other missions.

The aircraft is known for its 105mm side-firing cannons which enable it fire from a side-axis position during close-in combat supporting ground troops. The AC-130 Gunship also has a 25mm Gatling gun and a 40mm weapon, according to Air Force statements.

The AC-130 “Spooky II” gunship is a standard C-130 transport aircraft engineered for close-air support combat. Its 105mm gun, called a M102 Howitzer, fires 33-pound high explosive shells at a firing rate of 10-round a minute, according to a report in Popular Mechanics. The weapon has a range up to seven miles and is the largest gun ever operated from a US Air Force aircraft, the report said.

In a recent attack, AC-130 gunships and A-10 Warthog close-air support aircraft together destroyed an ISIS fuel convoy of more than 100 vehicles.

The AC-130 gunships make up a small portion of a fleet of roughly 500 C-130 planes throughout the Air Force and Special Operations Command, Toth explained.

The Air Force remains vigilant about its C-130 fleet to ensure the airframes, wingboxes, avionics and communication systems remain safe and operational. This is particularly true of the older 1980s-era C-130Hs, Toth added.

“The thing that causes the greatest risk to the airplane is the life of the wing. We monitor the wing of the aircraft and as the wings get past their service, life we bring the airplanes back in and bring in new structures -- with the primary focus being the center wingbox which is the area where the wings mount to the fuselage,” Toth said.

Kris Osborn became the Managing Editor of Scout Warrior in August of 2015. His role with Scout.com includes managing content on the Scout Warrior site and generating independently sourced original material. Scout Warrior is aimed at providing engaging, substantial military-specific content covering a range of key areas such as weapons, emerging or next-generation technologies and issues of relevance to the military. Just prior to coming to Scout Warrior, Osborn served as an Associate Editor at the Military.com. This story originally appeared in Scout Warrior. This piece was originally featured in May 2016 and is being republished due to reader's interest.