Death by Stealth: How the F-22 Is Getting Ready for Battle in the Sky 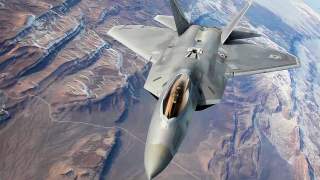