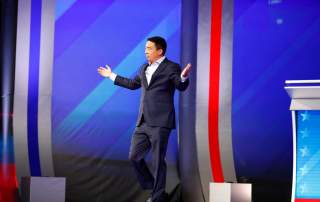 Yang gained about 0.93% of his total following before Thursday’s debate in new followers.

One reason Yang may have caught the attention of such a large online audience is through his $120,000 debate-night giveaway. The New York entrepreneur announced 10 giveaways $12,000 giveaways during Thursday night’s third Democratic primary debate in Houston, Texas.

“My campaign will now give a freedom dividend of $1,000 a month for an entire year to 10 American families — someone watching this at home right now,” Yang said during his opening debate statement. “If you believe that you can solve your own problems better than any politician, go to Yang2020.com and tell us how $1,000 a month will help you do just that.”

“This is how we will get our country working for us again, the American people,” he added.

The announcement highlighted the candidate’s universal basic income (UBI) policy called “the Freedom Dividend,” which is possibly his most popular idea and would give every U.S. citizen over the age of 18 a monthly allowance of $1,000, or yearly allowance of $12,000.