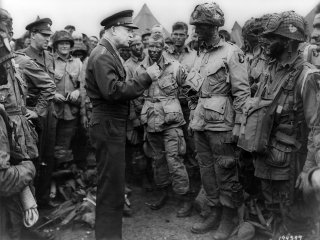 On June 6, 1944, the Allies mounted the largest amphibious invasion in military history– it was D-Day and some 156,000 Allied soldiers landed in Normandy, France beginning the liberation of Western Europe. However, in the days and weeks that followed the German military – including their leader Nazi dictator Adolf Hitler – believed the landings at Normandy were merely a feint, a deception with the real invasion still to come at Pas de Calais.

Given the size of the invasion and the fact that a beachhead was being established, why did the Germans believe Normandy as a decoy?

Because of the hard work of Operation Bodyguard, the codename for the World War II deception plan, all the signs pointed in that direction. It was designed to mislead the German high command as to when and where the invasion would take place.

One factor was the creation of a fake army, but with a very real and high profile commander. This was the First United States Army Group (FUSAG), which was based around Dover just across the English Channel from Calais, and it was led by the very prominent U.S. General George S. Patton, considered by the Germans to be the best of the Allied military leaders.

FUSAG was more than just a fake name, even if it wasn't an actual army group. The Allies used a variety of deception tactics and tools. This included fake radio communication that were sent out, while inflatable tanks and faux landing craft were positioned around Southeastern England, which could be seen from the area and looked to be the staging grounds and build-up for an invasion force.

Very real soldiers were even sent out wearing shoulder patches on their uniforms for non-existent units that made up FUSAG. These were even created by U.S. Army's heraldry department, which is responsible for the creation of real unit insignia.

Those efforts were all conducted as part of Fortitude South, one part of the larger Operation Bodyguard.

Meanwhile Fortitude North – which was coordinated from Edinburgh Castle and consisted of the fake British Fourth Army – helped convince the Germans that an invasion would land in Norway. It involved another non-existent unit, the British Fourth Army – which was named after a very real unit that existed in the First World War and took part in the Battle of the Somme. While the effectiveness of Fortitude North has been debated for years, it likely tied down 13 German army divisions, which remained stationed in Norway.

Spies also played a crucial role in deception operations. While the non-existent unit shoulder patches were employed so that perhaps enemy agents would see them, the truth was that by 1944 nearly all of the German agents had been intercepted while many were recruited as double agents under the "Double Cross System."

Known as "Garbo" Juan Pujol Garcia took matters even further and he created his own network of imaginary agents. He reported to the Germans that they were supplying him information on the Allies' preparations. He misled the Nazi leaders about the time and location of the invasion and helped convince his German handlers that Pas de Calais was the target of the main attack.

The deception continued even on the eve of the invasion when the RAF and the Special Air Service (SAS) dropped around 500 dummy paratroopers far from the actual D-Day airborne landing zones. The paradummies, which were dubbed "Rupert" by the British and "Oscar" by the Americans as part of Operation Titanic, confused the Germans. In addition, paper strips covered with aluminum and known as "Window" were deployed along the French coast, which on German radar appeared to be a continuous blip that could be mistaken for an approaching fleet.

All of these tactics resulted in confusion, and by the time the Germans finally accepted that another invasion wasn't coming at Pas de Calais the Allies were poised to break out and begin the liberation of France.