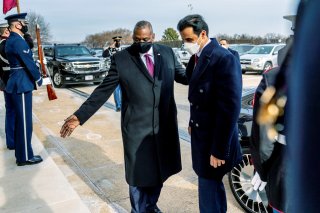 Secretary of Defense Lloyd Austin met with Sheikh Tamim bin Hamad Al Thani, Qatar’s Emir, to “affirm the strength of the U.S.-Qatar defense partnership and its key role in the U.S. strategic bilateral relationship,” according to a Pentagon press statement issued earlier this week.

“Secretary Austin reiterated his heartfelt gratitude to the [E]mir for Qatar’s indispensable and ongoing support to the United States in Afghanistan,” the statement added. “The leaders discussed shared regional security interests, including continued cooperation on Afghanistan, de-escalating tensions in the region, and the full scope of threats from Iran.” Austin thanked Al Thani for Qatar’s “longstanding and gracious hosting of U.S. forces at Al-Udeid Air Base and reiterated U.S. commitment to continued security cooperation with Qatar.”

The United States and Qatar have enjoyed a warm defense relationship since the early 1990s, with American troops currently operating two military bases in the country. In 2014, Doha and Washington inked an $11 billion deal for the sale of Patriot and Javelin systems, as well as AH-64 Apache attack helicopters.

President Joe Biden announced on Monday that he is planning to designate Qatar as a major non-Nato ally. Qatar would be the third Gulf country—after Kuwait and Bahrain—to receive this status, which comes with a host of economic and military privileges.

It was revealed earlier this month that 170 members of Qatar’s Air Force may soon travel to the Mountain Home Air Force Base in Idaho to learn how to operate an advanced model of the F-15 fighter.

The training is part of a $12 billion deal dating back to 2017, when Qatar purchased thirty-six aircraft, their associated weapons, maintenance support equipment, and U.S.-based training, according to Defense News. The training will “include in-person instruction, simulation events, and flying operations,” according to a Boeing press statement issued at the time. As part of the deal, Boeing is to establish an aircrew and maintenance training center at Al Udeid Air Base in Qatar, which will be operated through 2024. Qatar has purchased the F-15QA “Qatar Advanced” variant of the fighter. The F-15QA is comparable in specifications and performance to the new F-15EX fighter that is currently being procured by the U.S. Air Force.

"The sale as a whole is obviously a big strategic advantage," Lt. Col. Peter Yule, director of the Mountain Home Base Wing Integration Office, told the Idaho Statesman. "[It will] continue to increase capability of partner nations within the Middle East, a region of huge influence for the United States. So the more we can increase capability with our appropriations there, the less reliant we have to be on a large footprint by the United States military."