Defund the Police? How About Defund Teachers Unions. 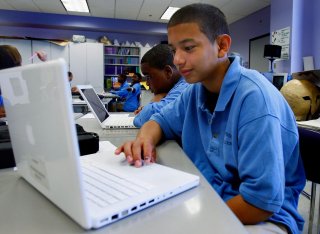 Four months ago, few, if any, anticipated that the government would close down a large portion of the American economy. Yet state responses to the coronavirus pandemic did just that, shuttering stores, restaurants, schools, and sporting events.

One month ago, it was hard to imagine anything diverting attention from that pandemic, which had received around-the-clock news coverage since March. But massive protests sparked by George Floyd’s tragic death did just that. Our collective attention shifted.

More recently, a new flashpoint emerged: calls for “defunding” the police. Although there is significant disagreement on what that means, a consensus is emerging that police unions protect bad officers from accountability.

That consensus is right. And that same logic applies to the powerful teachers’ unions as well.

Teachers’ unions regularly fight to protect bad actors from accountability. A recent national survey commissioned by NPR found that over 60 percent of both unionized and non-unionized teachers agreed that unions make it more difficult to fire bad teachers.

Union leaders prize protectionism over teaching. The National Education Association recently defeated an internal business item calling to “re-dedicate itself to the pursuit of increased student learning in every public school in America by putting a renewed emphasis on quality education.”

Given that orientation, it’s not surprising that a 2019 study published in American Economic Journal found that collective bargaining decreases male students’ later-life annual earnings by $2,134 and reduces employment opportunities.

Since 1960, the United States has increased inflation-adjusted K-12 education spending per student by 280 percent, yet the unions continue to demand more money despite their failure to turn those dollars into improved academic performance.

Of course, not all of that money goes into the classrooms. As Kennesaw State University’s Ben Scafidi noted, between 1992 and 2014, real spending per student increased by 27 percent, but real teacher salaries dropped by 2 percent.

Where did the money go? Largely toward hiring more support staff and overall administrative bloat. Adding employees to the system doesn’t benefit students, but it does benefit the unions: a larger membership means increased dues revenue and political power.

A lot of the money also goes to those no longer teaching. Illinois, for example, now spends more on teachers than all other K-12 expenditures combined.

Union opposition to teacher accountability takes many forms. Just last year, the two teachers’ unions in Rhode Island fought against a bill that would have criminalized sex between school employees and students. And New York City warehouses teachers accused of misconduct while still paying them. One teacher in Queens accused of sexually abusing female students has been exiled in a “rubber room” for twenty years. During that time, he has collected $1.7 million in salary, while retaining full benefits.

With a combined membership of over 4.5 million and a budget of over $550 million each year, the two national teachers’ unions are able to trump accountability with political clout. Yet their political agenda is highly partisan.

In 2018, the Supreme Court chipped away at the unions’ monopoly power, and decided in Janus v. AFCSME that they could no longer collect “agency fees” from teachers who did not want to belong to the union. Prior to Janus, twenty-two states had the practice in place, taking money from teachers even if those teachers did not want to be associated with the union. These agency fees had allowed the unions to amass a considerable war chest over the decades.

Although Janus was an important step in the right direction, much more needs to happen. So, what can be done to “defund” unions?

Teachers’ union contracts make it nearly impossible to fire inept and underperforming teachers due to ingrained seniority rules. As Reason Foundation’s Christian Barnard points out, if a school principal were to replace a highly ineffective teacher with a teacher of average effectiveness, that change alone could increase a student’s lifetime income by $52,000—an estimated $1.4 million for the classroom.

In addition to protecting ineffective teachers at the expense of hiring and retaining high-quality teachers, union contracts also base teacher salaries on seniority rather than merit and reward teachers with masters’ degrees—despite no evidence that such degrees improve teaching. Teachers’ unions, in collaboration with colleges of education, have also propped up a teacher certification regime that puts up barriers to entry into the profession but fails at continual evaluation once a teacher is in the system. This is precisely the opposite of a rational hiring process.

States should make it easier for mid-career professionals and individuals with subject-matter expertise to enter the classroom by eliminating occupational licensure barriers such as teacher certification. Research demonstrates there is little to no difference in student academic achievement between teachers who are certified through a college of education, alternatively certified, or uncertified altogether. While state certification requirements are a boon to colleges of education, they have likely diminished excellence in the classroom.

When negotiating union contracts, states and districts should also avoid increasing spending to underwrite growth in non-teaching staff and ever-diminishing class sizes. The five-year contract between the Chicago Teachers’ Union and the city is a good example of what not to do. Signed late last year, its fifth-year cost alone will reach $3.1 billion—an enormous tab that necessitated an immediate tax hike on Chicagoans.

Most critically, states should enable parents to decide whether or not they prefer to send their children to unionized district schools, or some other option that is a better fit for them, whether charter or private.

Ultimately, it will take parents to defund the unions and the special interest groups that have stood in the way of education improvement for decades.

Lindsey Burke is the director of The Heritage Foundation’s Center for Education Policy.

Corey DeAngelis is the director of school choice at Reason Foundation, executive director at Educational Freedom Institute, and an adjunct scholar at Cato Institute.