Dem. Rep. Swalwell: 'It’s an Abuse of Power to Remove an Ambassador for Political Reasons' 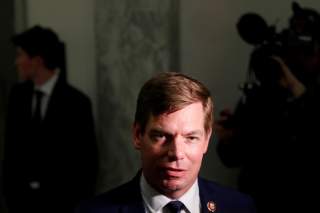 California Democratic Rep. Eric Swalwell said it’s an “abuse of power” for the president to remove an ambassador “for political reasons” during a Thursday interview on CNN.

Swalwell’s comments on “New Day” with host John Berman come after former U.S. Ambassador to Ukraine Marie Yovanovitch said during a closed-door impeachment hearing on Oct. 11 that after stepping down from her position in May, she was told President Donald Trump wanted her removed from the position due to a lack of trust, according to the New York Times.

Yovanovitch, however, said in her Oct. 11 testimony that the decision to remove an ambassador should be up to the president, though she felt he was influenced by other people in his political circles.

“I thought that this was a dangerous precedent, that …  people who don’t like a particular American ambassador could combine to, you know, find somebody who was more suitable for their interests. It should be the State Department, the president, who makes decisions about which ambassador,” according to a transcript released Nov. 4 by CBS.

“And, obviously, the president did make a decision,” she added, “but I think influenced by some who are not trustworthy.”

“This statement inadvertently gives you an inside look at how unserious and utterly baseless the Democrats’ impeachment case against [Trump] is. They think it’s an ‘abuse of power’ to remove someone who explicitly serves at the pleasure of the president,” he tweeted.