Democratic Debate: Here’s Who Got The Most Speaking Time 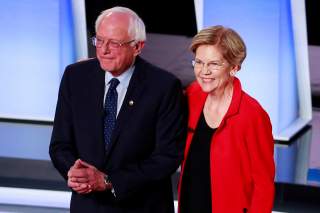 Democratic Massachusetts Sen. Elizabeth Warren dominated the debate stage Tuesday night, getting more speaking time than any other candidate with 18 minutes and 33 seconds.

Independent Vermont Sen. Bernie Sanders came in a close second with 17 minutes, 45 seconds of speaking time during the first night of the second round of Democratic debates in Detroit, according to The New York Times.

The numbers make sense, as Warren and Sanders were the highest-polling candidates on the stage. However, they still trail former Vice President Joe Biden, the current front runner. Biden is polling nearly 16 points above Sanders and 18 above Warren, according to the RealClear Poltics poll average Tuesday.

Sanders may have gotten the most speaking time but much of the time he was on the defensive, not the offensive. His Medicare for all plan defined the Democratic talking points on health care as his rivals either touted their support for his plan or picked it apart.

Sanders came in third in speaking time during the last round of Democratic debates in Miami in June. He trailed Biden and Harris, neither of whom were on the debate stage Tuesday.