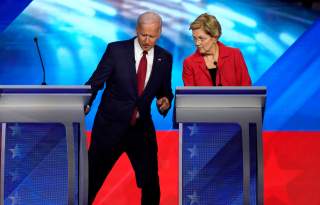 Former Vice President Joe Biden, former Texas Rep. Beto O’Rourke, and Sens. Elizabeth Warren of Massachusetts, Kamala Harris of California and Amy Klobuchar of Minnesota are not joining their fellow candidates at the forum, which will be held in Washington, D.C., The Washington Post reported Thursday. Biden, for his part, is planning to take part in a $1,000-a-head fundraiser in Illinois.

Most of the rest of the top contenders will attend. Sens. Michael Bennet of Colorado, Cory Booker of New Jersey and Bernie Sanders of Vermont, as well as South Bend Mayor Pete Buttigieg and businessman Andrew Yang, are slated to speak, beginning Thursday and ending Friday. Friday’s portion of the forum will coincide with another forum in Iowa that is focused on LGBTQ issues.

MSNBC’s forum is a risky move for candidates who are starving for attention. CNN’s seven-hour climate talkathon, for instance, was a ratings dud for the network. Only 1.1 million viewers watched the forum, putting CNN in third place behind Fox News and MSNBC on Sept. 4, according to The Hill, which cited Nielsen Media Research.

Climate change has nevertheless become a highly discussed issues during the 2020 Democratic primary, with some candidates making dire predictions about the world coming to an end in 12 years unless bold action is taken to confront the changing climate.

Sanders, Harris and Warren, for their part, are even supporting a ban on hydraulic fracturing, a method designed to extract natural gas from the ground.

All 10 Democratic candidates who participated in CNN’s town hall, including Biden, have proposed halting new leases to help energy companies pull out gas from millions of acres both onshore and off the coasts. Biden, perceived as the moderate of the candidates, also said the U.S. can take millions of gas-powered vehicles off the road.