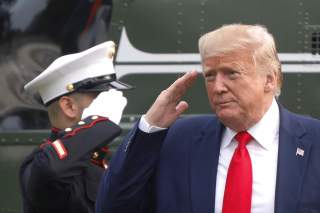 Charles McLaughlin, a 71-year-old Marine veteran of the Vietnam War, recalls how useful Medicare and Medicare Advantage were when he was fighting another battle, this one with cancer.

“I know a lot about Medicare and the supplement. I used it for breathing tubes, feeding tubes, stitches, staples, MRIs, CAT scans, blood tests, hydration shots, chemo treatments, radiation treatments,” the Lighthouse Point, Florida, resident said during a rally with President Donald Trump on Thursday in The Villages, Florida, a retirement community near Orlando.

Trump invited him to the stage to speak at an event that culminated in the president signing an executive order to strengthen Medicare and Medicare Advantage, the health care program for people 65 and older, at a time when many Democrats support a “Medicare for All” plan to expand the program to everyone.

“I also want to say: My family, financially, would have been destroyed without Medicare,” the retired Marine said, adding:

The politicians on the left are pushing Medicare for All. I say, the result would be no Medicare at all. It will collapse under the load of the system. It will overload it. The lines would be incredible.

Who knows, I probably wouldn’t be here.

There’s no such thing as “free,” period.

Declaring Medicare “under siege,” Trump signed an executive order after an hourlong speech.

“We are making your Medicare even better, and we are not letting anyone take it away from you,” Trump said. “These people on the other side are totally crazy. They want to take it away and give you lousy health care.”

He added: “Medicare is under threat like never before.”

“Almost every major Democrat in Washington has backed a massive government health care takeover that would totally obliterate Medicare,” the president said.

The Medicare for All proposal would do away with Medicare Advantage plans by eliminating private health care plans.

Trump also invited Socorra “Corey” Spangler, of Summerfield, Florida, to speak. She noted her family came from Mexico to the United States legally when she was 5-years-old. At age 65, she began having heart problems.

The following Monday, I was in surgery with my five bypasses, and I went home the following Friday. This would never happen with Medicare for All.

I love my Medicare Advantage plan because I can choose the doctor when I need it and get the care I need in a [quick] manner. It wouldn’t happen with Medicare for All.

Thank you, Mr. President, for saving my health care.

Over the past two years of his presidency, Trump said, 1,200 more Medicare Advantage plans have been created. He added that premiums have plummeted by 28% and are at their lowest level in more than a decade.

That’s in sharp contrast to the average of 54% rise in premiums for Obamacare plans since 2014, said Robert Moffit, a senior fellow at The Heritage Foundation.

“The president wants to build on the success they have had managing Medicare Advantage,” Moffit told The Daily Signal. “They have used the administrative authority to increase the plans for chronically ill people, such as people with congestive heart failure or diabetes.”

The executive order also further promotes using medical telehealth services to be delivered by telephone or online. That would, in theory, reduce expensive emergency room visits for minor or easily treatable ailments.

Fred Lucas is the White House correspondent for The Daily Signal and co-host of "The Right Side of History" podcast.