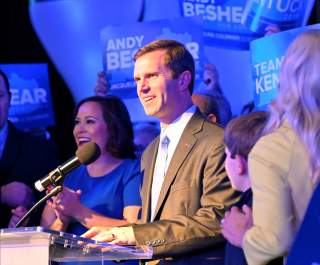 Tuesday’s election results saw liberals and some conservatives spotting an opening for Democrats in the 2020 presidential election while other Republicans, including President Donald Trump, played off the party losses.

Democrats took control of the Virginia state legislature for the first time in decades Tuesday, allowing the party to control redistricting before the 2020 census, CNN reported. In another flip, Democratic state Attorney General Andy Beshear claimed victory over incumbent Republican Gov. Matt Bevin for the governor’s seat in Kentucky, a state Trump won in 2016.

Many blamed Bevin for the apparent loss rather than seeing it as a Republican-based issue. The governor was voted as the nation’s least favorite in a May poll and faced controversy over various comments throughout his time in office. Some Republicans highlighted the close race and noted that Trump, who endorsed Bevin, was the only reason that the results ended up being so close.

“The President just about dragged Gov. Matt Bevin across the finish line, helping him run stronger than expected in what turned into a very close race at the end,” Trump’s campaign manager Brad Parscale said in a statement, according to The Hill.

Josh Holmes, a GOP commentator and former chief of staff to Republican Sen. Mitch McConnell, was one of a few to point out that the results of Tuesday’s elections could be worrisome, particularly if people looked at voting history.

Taking a step back from KY and looking at all the elections last night, GOP should be most concerned about what happened in local elections in Chester, Delaware and Bucks County, PA last night. That is genuinely alarming if you know the voting history.

Conservative CNN commentator Amanda Carpenter also suggested that the Republican’s pushing the narrative that Bevin lost the race himself was wrong.

“R’s are saying that Bevin’s loss doesn’t matter because he was a singularly arrogant executive who picked stupid fights that alienated suburban voters,” Carpenter tweeted. “Oh. I guess that has no applicability to 2020 then. Hmmm. Also, pls explain Virginia.”

Meanwhile, Democrats appeared united as they celebrated wins in Kentucky and Virginia.

“Governor-Elect Andy Beshear will restore decency to Frankfort and has spent his career lifting up every single Kentuckian,” Democratic Governors Association Chair Gina Raimondo said in a statement, according to the Washington Post. “Tonight’s victory is a major pickup for Democrats and a massive rejection of Bevin’s record of stoking chaos, undermining public education, and trying to gut health care coverage.”

“Tonight, by voting in Democratic majorities in both chambers of the General Assembly, Virginians sent a clear, powerful message that will resonate across this nation and shake the walls of the White House,” Biden tweeted.

There is no such thing as a permanently red state. Thank you to every organizer and supporter whose acts of hope made last night possible. You helped to elect @AndyBeshearKY in Kentucky and flip the Virginia legislature. Congratulations to Democrats across the country!

“We just saw in tonight’s elections—from Virginia to Kentucky—Americans are rejecting Trump’s divisive brand of politics. We need moral leadership that seeks to unite this country and work for a better future for all Americans,” Booker said.

The president tweeted about the elections too, following some of the Republicans’ talking points that his campaign rally Monday in Kentucky “had a massive impact on all of the races.” The president played up the election results, despite Republicans losing in the two states.

#ElectionNight Won 5 out of 6 elections in Kentucky, including 5 great candidates that I spoke for and introduced last night. @MattBevin picked up at least 15 points in last days, but perhaps not enough (Fake News will blame Trump!). Winning in Mississippi Governor race!

Bevin told supporters Tuesday that he is “not conceding this race,” suggesting that the Kentucky governor may push back on the results. He did not specify what action he would take.

“Congratulations to @tatereeves on winning Governor of the Great State of Mississippi,” the president tweeted. “Our big Rally on Friday night moved the numbers from a tie to a big WIN. Great reaction under pressure Tate!”

Content created by The Daily Caller News Foundation is available without charge to any eligible news publisher that can provide a large audience. For licensing opportunities of our original content, please contact [email protected]lycallernewsfoundation.org.