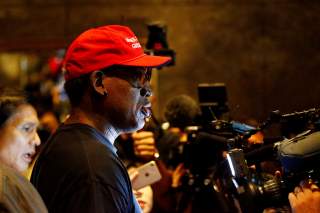 Retired NBA Hall of Famer Dennis Rodman says he plans to invite rapper Kanye West to visit North Korea in hopes that it will inspire a new song, maybe even a whole album.

Rodman, famous not only for his status as an NBA legend but also his unusual relationship with North Korean leader Kim Jong Un, has made multiple trips to North Korea over the years and has built a close personal friendship with Kim. Now, he wants to invite West, who recently praised Rodman as one of his “biggest inspirations,” to visit the troubled country.

“I think he’s a big Chicago Bulls fan. I think that he respects me as far as understanding my views. And Kanye, he’s doing amazing work around the world so I respect him too. So hopefully one day we’ll get together and collaborate on certain things. Guess what, I’ll take Kanye West to North Korea with me,” Rodman told US Weekly in an exclusive interview.

“I’m going to invite him next time I go to North Korea. If the door’s open in September, I will invite Kanye West with me to go to North Korea with me,” he explained. “If he wants to make an album about that he’ll be there for like six to seven days, and he’ll see what’s going on. Now, go make a song about this. So here you go.”

Rodman has been a staunch proponent of dialogue between the U.S. and North Korea. He tearfully celebrated the summit between Kim Jong Un and President Donald Trump — another of Rodman’s friends — in Singapore last month.

Both Rodman and West have at various times offered their support to the president in his endeavors, sporting “Make America Great Again” apparel in photos that appeared online.