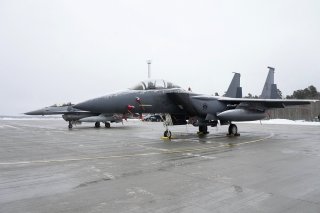 However unlikely a massive World War III clash between Russia and NATO may be, there are some disturbing reasons why such a scenario may be a realistic possibility.

At the very least, Pentagon leaders are not ruling out the possibility that NATO and Russia could still clash. While most of the West’s proposed retaliatory measures pertain to imposing economic sanctions against Russia and coordinating military and financial support to Ukraine, both Defense Secretary Lloyd Austin and Chairman of the Joint Chiefs of Staff Gen. Mark Milley specifically cited NATO military power as being on the table to defend U.S. allies.

Now that Russia has amassed nearly 100,000 troops, weapons, and other assets along the border with Ukraine, the Pentagon is thinking about and discussing the question of NATO’s Article Five.

"A move on Ukraine will accomplish the very thing Russia says it does not want: a NATO alliance strengthened and resolved on its western flank," Austin told reporters at the Pentagon on Jan. 31, according to a transcript of his remarks.

While Ukraine is just a NATO partner and not a NATO member, a Russian invasion certainly raises the possibility that NATO’s Article Five collective security measure could be activated. As a collective security agreement, Article Five stipulates that an attack on any one member is equivalent to an attack on all NATO nations, something which therefore justifies a larger-scaled, multinational coordinated response.

While Austin did not say Article Five would definitely be invoked, he certainly referred to its importance in the context of Ukraine.

"The United States will contribute to NATO's response forces. And we will coordinate with our NATO allies. We will make sure that they have the capabilities that they need to defend themselves. Article Five is clear on its point of attack against one NATO member is an attack against us all. And as President Biden has said, the United States holds this as a sacred obligation. And we will do right by that commitment," Austin reportedly told reporters at a Pentagon briefing.

In attendance to support Austin, Milley explained that NATO already has significant military strength on the ground in the region. Milley said that NATO has more than one hundred and thirty brigades of “maneuver forces,” not including U.S. forces and ninety-three squadrons of high-end fighters.

Milley also outlined the conceptual foundation of the United States’ and NATO’s defense of Ukraine in clear terms:

“Ukraine has the right to be independent and they have been an independent country since 1991. Russia signed the Budapest Memorandum in 1994, with the United States and Great Britain, that guaranteed the territorial integrity and sovereignty of Ukraine,” Milley said.