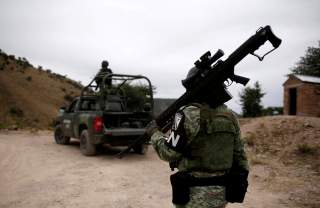 Several Republican congressmen urged the administration to label Mexican drug cartels as terrorists and listed four particular groups worthy of the designation in a letter to Secretary of State Mike Pompeo Thursday.

Reps. Chip Roy of Texas, Mark Green of Tennessee and Mark Walker of North Carolina called on the State Department to brand Mexican drug cartels as foreign terrorist organizations “as expediently as possible,” in a letter the Daily Caller News Foundation obtained.

More notably, the congressmen urged the Department of State’s Bureau of Counterterrorism to brand four specific drug cartels as terrorists and made the case as why they fit the definition: the Sinaloa Cartel, Jalisco New Generation Cartel, Gulf Cartel and Los Zetas Cartel.

“While there are many of these criminal entities present in Mexico, four major cartels use extreme terrorist tactics to exert both political and economic influence throughout the country. As a result, the Sinaloa Cartel, the Jalisco New Generation Cartel, the Gulf Cartel, and Los Zetas Cartel endanger United States citizens and threaten our country’s national security,” the congressmen wrote.

“This designation would help U.S. efforts to limit the groups’ power and control and protect American citizens,” they continued.

The letter comes after President Donald Trump, during an interview in November, announced he was working to designate drug cartels as terrorists. If such an action is taken, it would dramatically change how the U.S. government can fight transnational crime.

A terrorist designation ignites a number of limitations. Members of the group are barred from entering the U.S., and people are legally prohibited from knowingly proving the group with support. Also, banks and financial institutions are bound by law not to conduct business with any group labeled as a terrorist organization.

The increase in talk about designating drug cartels as terrorists comes amid increased violence in Mexico. The havoc these groups unleash resulted in the death of nine American citizen in Mexico in November. The massacre left six children and three women dead.

“I don’t want to say what I am going to do, but they will be designated,” Trump told Bill O’Reilly during the interview.

“Look, we are losing 100,000 people a year to what is happening and what is coming through from on Mexico,” the president continued. “They have unlimited money, the people, the cartels, because they have a lot of money, because it is drug money and human trafficking money.”

Roy — who represents a Texas congressional district that sits not far from the southern border — introduced legislation in early 2019 to designate these cartels as terrorists. The Republican lawmaker told the DCNF in November that, since the massacre of Americans, there has been a surge of interest by his colleagues. Green and Walker are co-sponsors of Roy’s legislation.

“Cartels engage in a wide range of crimes, from kidnapping and murder to human trafficking and drug smuggling, and we again thank the Administration for indicating plans to label these groups what they are: terrorist organizations,” the congressmen said in their letter to Pompeo. “Doing so as quickly as possible would be a major step forward to protect U.S. national security and save American citizens’ lives.”