Despite NATO Pressure, German Defense Budget Has Failed to Increase 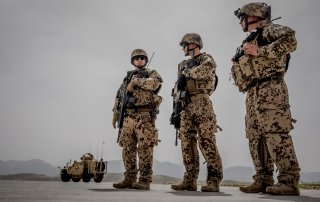 During the Trump administration, the White House strongly applied pressure on Germany to increase its military spending. Even as Germany had reported a record high in NATO defense spending for 2021—with a budget of €53 billion ($63.8 billion), a 3.2 percent increase over the prior year when spending was capped at an estimated €51.4 billion—a new report from research firm Global Data found that the budget growth is set to slow next year.

As a result of the coronavirus pandemic, Germany could see a negative compound annual growth rate (CAGR) of -0.04 percent by 2026. How the Biden administration, which may or may not still be in the White House by that point, as well other NATO members will feel is unclear. However, Global Data warned that a decline in Germany’s defense spending could add to ongoing ill feelings by some members, especially as Germany has the fourth-largest economy in the world, with a gross domestic product (GDP) that is ten times the size of fellow NATO state Estonia.

Increasing the Pressure on Germany

Even as President Joe Biden has vowed to boost ties with NATO, unlike his predecessor, NATO Secretary-General Jens Stoltenberg has repeatedly said that he expects that there will be pressure from the United States for other NATO members to contribute more towards defense.

Biden’s stance hasn’t been as strong as former President Donald Trump, who even suggested that the United States would withdraw from the alliance if partner nations failed to immediately meet the goal of spending two percent of their GDP on defense.

German defense spending in 2020 had been in line with NATO calculations, and it accounted for 1.57 percent of the GDP, which was up from 1.36 percent the previous year.

DW also reported that an internal analysis for 2022 had shown that the goal of having Germany reach the two percent goal likely can’t be initiated or realized on time, under the current budget. The research from Global Data painted an even gloomier picture.

According to the “Germany Defense Market Attractiveness, Competitive Landscape and Forecast to 2026,” which was released this month, German defense expenditure will only see minute growth to $58 billion in 2026 from the current $57.5 billion of this year.

Germany’s greatest threat hasn't been an outside adversary, but like many other countries, it was hit especially hard by the coronavirus, impacting its economy and abilities to support its various government programs.

“The reduced growth rate in 2021 is unsurprising when the domestic political arena and the financial impact of COVID-19 are considered,” explained Madeline Wild, associate defense analyst at GlobalData.

“Germany’s economy shrunk by 1.65% in 2020, according to GlobalData research,” she added in an email to the National Interest. "Further, Germany has experienced delayed economic pressure, and government funds are being stretched beyond means exhibited in the years prior. Slow growth, levels have remained evident despite pressures from NATO (including Secretary-General Jens Stoltenberg) pressing Germany to increase spending.”

The situation has further been exacerbated by an overextended general budget.

“However, other NATO members such as France are increasing their defense spending despite the intense financial impact of COVID-19 and thus some ill-feeling may be fostered against Germany: it is one of the richest nations in Europe, yet consistently fails to meet its 2% of GDP on defense spending,” Wild said. “Issues with the Bundesamt für Ausrüstung, Informationstechnik und Nutzung der Bundeswehr, which oversees defense procurement, are well publicized and deep set. The department has been labeled inefficient and overly bureaucratic, which has meant that up to 10% of the acquisition budget was unable to be spent in some years. This has been largely attributed to a lack of trained staff causing hold-ups and funds getting trapped in bottlenecks.”

Even as the coronavirus has impacted spending, Germany's modernization efforts may require that it loosens the purse strings in the coming decade.

“German defense spending is driven by needs to modernize the aging fleet of the Bundeswehr in line with its allies to operate successfully and coherently within NATO,” Wild said. “Several substantial contracts have been signed to push forward the process of modernization, including the funding of the European Future Air Combat System (FCAS), the procurement of over a thousand PUMA IFVs, additional A400M Atlas aircraft and investment into the modernization Eurofighter Typhoon fleet. Despite this, spending levels are still not high enough to placate other NATO members, which are pushing Germany to spend 2% of its GDP on defense.”