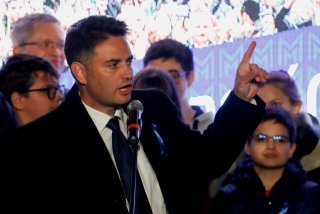 Many in liberal circles are celebrating the result of the first countrywide primary in Hungary’s history. More than 600,000 opposition voters turned out to elect Peter Marki-Zay as the opposition candidate for prime minister. However, serious observers of Central European politics are less impressed. A more sober assessment of the situation based on an understanding of Hungary’s political landscape reveals that incumbent Prime Minister Viktor Orban remains in a strong position.

Marki-Zay, a largely unknown Catholic and the father of seven, made his political strides in 2018 when he became mayor of his hometown of Hodmezovasarhely, a Fidesz party stronghold for the previous twenty years. The other leading contender in the opposition primary was left-wing Klara Dobrev, vice president of the European Parliament and the wife of former Hungarian Socialist Party prime minister Ferenc Gyurcsany.

Gyurcsany was exposed in a leaked recording in 2006 for lying about the economy to win elections. He remains one of the most divisive figures in Hungarian politics. His wife stood no real chance to win against Marki-Zay, who received 57 percent of votes.

Even though Marki-Zay dominated the six-party alliance’s primary runoff, only two of the opposition parties involved endorsed him. Others decided to play it safe and hedge their bets.

For that matter, Marki-Zay’s endorsements from the leftist Momentum and the Socialists do not bode well for the candidate who has emphasized his “conservative credentials.” Marki-Zay seeks to use that label to take on the current conservative prime minister. To quote famous French sociologist and political theorist, Alexis de Tocqueville: “History is a gallery of pictures in which there are few originals and many copies.”

Despite opinion polls showing that the opposition alliance and the ruling Fidesz party go head-to-head, Marki-Zay will not have an easy road during the general election in April 2022. It is no coincidence that Orban is the longest-serving prime minister in the country’s history. Moreover, Orban has nearly unlimited resources at his disposal, over thirty years of political experience, and supporters from different social segments.

Meanwhile, it is difficult to distinguish Marki-Zay’s ideas from Dobrev’s. Before pledging to support Marki-Zay in ousting Orban, Dobrev argued that Hungary “from 2022 needs just, progressive, leftist policies.” Marki-Zay is the founder of the grassroots Everybody’s Hungary Movement (MMM) and a strong supporter of the European Union and the introduction of the euro.

“Hungary should strengthen ties with the European Union, put its economy on a path to adopting the euro currency and join the European Public Prosecutor’s Office to root out corruption,” Marki-Zay told Reuters.

When Hungary joined the EU in 2004, it pledged to join the Eurozone without a specific deadline. A recent survey from Eurobarometer found that 69 percent of respondents in Hungary would like to switch to the euro while 26 percent were opposed. The remaining 5 percent were undecided. More Hungarians are now embracing the euro as the national currency due to economic uncertainty caused by the Covid-19 pandemic and the weakening value of the forint.

Still, Marki-Zay admits that the country “was unlikely to enter the ERM-2 mechanism, a mandatory stage for joining the euro, before 2026.” It is hard to disagree with Zoltan Miklosi, a political scientist at Central European University, who described Marki-Zay as an “unusual populist.” In fact, Marki-Zay seems to be a political opportunist. Now he is the only viable option for the opposition to oust Orban.

To address this challenge, Orban should remain true to his political ideals. He must manage the changeover to the euro issue that should not, under any circumstances, damage Hungary’s stable economic development.

Bearing in mind that the country’s primary goal is “to continue to catch up” with the West, as the National Bank of Hungary’s (MNB) Deputy Governor Barnabas Virag said in July, Orban would be wise to take over the narrative on the matter by starting a fact-based, professional discussion on when would be the best time for Hungary to join the Eurozone.

Orban should clarify to the public that the main objective during the process is to avoid the rapid decline in real interest rates that may lead to an increase in public debt, as abnormal current account imbalances would not be in the best interest for Hungarians.

The alternative to Orban is the so-called coalition of “the clean” that includes the Democratic Coalition, the Socialists, liberals, and the formerly far-right—and now center-right—Jobbik party. With such a coalition, it is doubtful “Whether Hungary will remain a European country” or whether Hungarian people “will be free,” as Marki-Zay said. What is likely is that an opposition victory would please the enemies of Hungary’s sovereignty and Western liberals in Brussels.

Adriel Kasonta is a London-based political risk consultant and lawyer. He is a former chairman of the International Affairs Committee at the oldest conservative think tank in the UK, Bow Group, and an editorial board member at the Central European Journal of International and Security Studies, a quarterly peer-reviewed academic journal based in Prague. His work has been published in Forbes, CapX, National Review, The American Conservative, The National Interest, and The Times of Israel, to name a few. Kasonta is a graduate of London School of Economics and Political Science (LSE).