Despite Promises, the Taliban May be Engaged in Revenge Killings 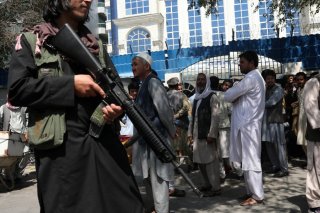 When the American Civil War ended, despite the fact that Confederate President Jefferson Davis and General Robert E. Lee were truly traitors under the U.S. Constitution's definition of treason, neither man—nor any other Confederate—was ever tried for their crimes. That was a far cry from what the losers in other civil wars faced. King Charles the First of England literally lost his head after the English Civil War, while countless individuals were killed following the Russian, Spanish, and Chinese Civil Wars.

Perhaps some in the United States believed that the Taliban would take a cue from the Americans, who they claim to have defeated, and allow those who fought against them to return to their lives. After all, the Taliban claimed as they took control of Afghanistan last month that they weren't the same radical force that was driven from power in late 2001.

Some in the U.S. may have even believed that the Taliban wouldn't seek out revenge for those who supported the Americans and coalition forces.

The Taliban have reportedly begun executing revenge killings of former Afghan security forces, according to the United Nations High Commissioner for Human Rights Michelle Bachelet. She cited credible allegations that her office received word of the Taliban detaining former officials from the now overthrown Afghan government. Those officials, and in some cases their relatives, have later turned up dead.

Bachelet warned that Afghanistan is entering a "new and perilous phase," and despite past assurances that former government officials wouldn't be targeted, it seems that anyone who had worked for that former regime or assisted the United States and coalition forces might as well have a target on their backs.

"In contradiction to assurances that the Taliban would uphold women's rights, over the past three weeks, women have instead been progressively excluded from the public sphere," Bachelet told the Human Rights Council in Geneva.

Just last week, the BBC reported that the Taliban militants shot and killed policewoman Banu Negar in front of her family in the provincial city of Firozkoh, capital of central Ghor province. Taliban leaders told the BBC that they had no involvement in her death, and said they would investigate the incident.

"We are aware of the incident and I am confirming that the Taliban have not killed her, our investigation is ongoing," Taliban spokesman Zabiullah Mugaheed told the BBC.

Despite those claims to investigate Negar's murder, and denials that it is carrying out revenge killings, the Taliban have also made it clear that they are not interested in supporting women's rights. Women's sports have been ended, women can only attend schools completely separated from men.

On Monday, Waheedullah Hashimi, a senior figure in the insurgent group who is close to leadership, told Reuters that the Taliban plan to fully implement a version of Sharia.

"We have fought for almost forty years to bring [the] sharia law system to Afghanistan," Hashimi told the news wire. "Sharia ... does not allow men and women to get together or sit together under one roof. Men and women cannot work together. That is clear. They are not allowed to come to our offices and work in our ministries."

What could change the Taliban's minds—and perhaps result in a more moderate version of the group—would be whether foreign powers will be willing to help as the country faces a humanitarian crisis as a result of the pull-out of western forces.

Germany's Foreign Minister Heiko Maas, said on Monday that his nation would be willing to significantly step up its humanitarian aid, but only if the rights of its citizens are respected.

"We demand from the Taliban that they respect basic human rights, particularly the rights of women and girls," Maas said, adding that a "benchmark for us and our partners in determining our future engagement with a new Afghan government—including for possible development assistance."