Despite Unpopularity, Trump Can Win 2020. Here's How. 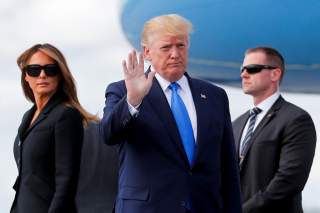 Donald Trump is the first president to ever be elected while being actively disliked by the majority of Americans. Trump was also the first person elected president who was significantly less popular than his counterpart.

Most Americans have heard of presidents losing the popular vote but winning the election. But to win while the majority of Americans oppose you? How is that possible?

At the time of the election, Trump had the highest unfavorability rating in history, with over 61% of Americans having an “unfavorable” view or “disapproving” of Trump. (There’s also an “undecided” option.)

Luckily for Trump, he faced a historically unpopular opponent. Before 2016, no losing presidential candidate had had an unfavorable rating above 47%. But on election eve, Hillary Clinton’s was 52%, an unprecedented election in American history.

Pretty soon, Americans will start to hear nothing but polls, predictions and political forecasts in the news cycle for the 2020 elections. But, as a statistician and political polling expert, we think that there is one polling prediction device that will be overlooked and misunderstood: approval ratings.

Winning without the popular vote

All presidents have experienced a bump in popularity between election and Inauguration Day. But only Trump still found his approval rating – the percent of Americans who approve of the way the president is handling his job – below 50% upon entering office.

According to FiveThirtyEight, the day Trump stepped into the White House, he had only a 45.5% approval rating. This stands in stark contrast to Barack Obama, for example, who took office with a 68% approval rating.

Moreover, Trump has the lowest approval average in history, at only 40%. The next lowest is Harry Truman at 45.4%.

These data clearly show that Trump is the least-liked president in American history. With such unpopularity, how could he possibly win again?

While election forecasting has become increasingly complex with new prediction models and techniques, there is an unsung hero of polling predictions: the approval ratings.

Introduced by George Gallup in the late 1920s, presidential approval ratings aimed to gauge the level of public support for the sitting president at any given time during his presidency.

It has been that simple.

As with any statistical analysis, the trends are more important than the raw numbers. The 2016 election was historically unprecedented in terms of favorability of the candidates, as is the political polarization of the U.S.

Look at the spread

We think that pollsters, and the general public, shouldn’t compare Trump’s approval ratings to past presidents.

What can be compared? The difference of highs and lows.

According to historical Gallup polls, Trump’s spread – the difference between the highest recorded and lowest recorded approval rating poll – has never been more than 13%.

Not a single president since this type of robust polling began, back to Franklin D. Roosevelt, has ever shown this level of consistency in approval ratings. In fact, the next-smallest spreadwas 27%, for John F. Kennedy.

Trump’s approval ratings show that he has the strongest base in historical times.

There are still nine months to go until the first ballots will be cast in the race to the White House for 2020, and the Democratic nominee’s identity will most likely not be known for almost a year. Still, Trump’s chances of reelection are being discussed daily.

Trump’s approval ratings are unlikely to go over 50%, given his lackluster starting point. So what does he actually need to win?

A simple statistical model applied to recorded approval ratings shows Trump has been garnering higher and higher approval ratings since taking office. Put simply, his base is staying strong and even growing. This is in direct contrast to all presidents except Bill Clinton.

Past incumbent presidents followed the rule that 49% approval and above means winning reelection, and anything below meant no second term. But Trump did not start at, nor will most likely ever reach, that level of approval.

Americans may again see something that, statistically speaking, has never been seen before. Approval ratings have high correlations with predicting the next president, but with Trump, the numbers are outside any historical trends.

The most unpopular winner ever may very likely win again.

This article by Liberty Vittert and Brendan Lind first appeared in 2019 in The Conversation via Creative Commons License.