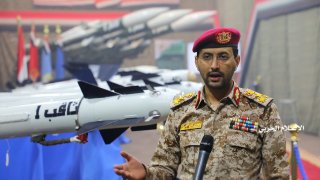 Yemen’s Houthi rebels launched a missile and drone attack on March 7, targeting Saudi Arabia’s oil port on the Persian Gulf. Although Saudi officials were able to intercept the strike preventing any injuries or damage, the Iranian-backed group succeeded in driving oil prices up and disrupting the global supply and economic market.

For the first time since May 2019, crude prices shot up to $70 a barrel. The missiles targeted Ras Tanura, the core of Saudi Arabia’s oil industry, and were followed by subsequent attacks in Dammam, Jazan, and Asir. A Houthi spokesperson confirmed the rebel group “fired 14 drones and eight ballistic missiles across the border” into Saudi territory.

In response to the Ras Tanura assault, U.S. officials again warned the rebels to cease their attacks on Saudi Arabia. State Department spokesperson Ned Price condemned the Houthi’s latest round of attacks as unacceptable, adding that “they are dangerous” and that “they put the lives of civilians at risk, including the lives of U.S. citizens.”

The Ras Tanura assault is the latest in a series of escalating aerial attacks by the Houthis since the inauguration of President Joe Biden, who has prioritized the recalibration of U.S.-Saudi relations and the reinstatement of a nuclear agreement with Iran. In a sequence of “course-correctives” initiatives, the Biden administration ended U.S. offensive support for the internationally-recognized government fighting the Iranian-backed Houthis in Yemen, striped away the rebels terror designation, and is continuing to leverage opportunities to reconcile with Iran regarding a renewed nuclear program.

Within hours of revoking the Houthi’s terror designation, the Biden team was forced to condemn the rebels for continued attacks against civilian targets in Saudi Arabia in early February. The rebels appear to be emboldened by the U.S. pivot in policy, increasing the number and intensity of its aerial and ground assaults.

The UN special envoy to Yemen denounced the Houthi’s offensive on Marib in late February, which has killed hundreds of fighters and continued to put thousands of civilians at risk. Yemen’s Minister of Information accused the rebels of targeting displacement camps and using human shields in this conflict, which would greatly exacerbate the already dire humanitarian crisis in the country. In addition to the ongoing Marib disaster, the Houthis have simultaneously launched dozens of missile and drones targeting civilian areas in Saudi Arabia in recent weeks.

The Biden administration has repeatedly denounced the Houthis for their escalating attacks against civilians, urging the group to halt their dangerous activity. However, not only has the Iranian-backed aerial and ground campaign been uninterrupted, it has also increased in number and scope. In fact, warnings from U.S. officials have done little to deter Iran from directing its proxies across the Middle East from engaging in malign behavior. In a shift from using rhetoric only to respond to Iran-directed activity, President Biden approved a retaliatory strike in Syria in late February following the continued rocket campaign targeting Baghdad’s fortified Green Zone in Iraq.

Biden’s concern for humanitarian implications in Yemen and his desire to end the gruesome six-year-long war makes sense. However, Iran is clearly emboldened by perceived U.S. concessions since attacks on the ground have only escalated. If the Houthis believe they will gain leverage by continued assaults in Yemen and Saudi Arabia, the humanitarian crisis and war itself will persist.

The Destructive U.S.-Backed Campaign in Yemen