Destroy a Bullet with Bullet: How America Can Get Better at Missile Defense 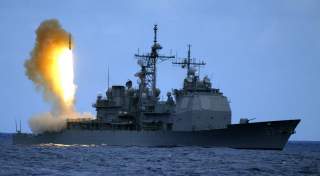 The first several months of 2019 have seen several notable developments in the areas of national security in space and strategic defense – areas that are becoming inextricably linked, and of increasingly vital importance to the U.S.

In early January, China landed its Chang'e-4 lander and rover on the far side of the Moon – a notable accomplishment with considerable technological implications.  In late February, the adversarial states of India and Pakistan engaged in cross-border hostilities – a startling situation given the nuclear stakes involved. The Hanoi summit with North Korea in February concluded with President Trump walking from negotiations over the disagreement on denuclearization terms.  And recently in March, Turkey seems poised to purchase several Russian S-400 missiles – a move that could further complicate U.S.-Turkish relations, and perhaps impact U.S. geopolitical interests more broadly.

Amidst the unfolding of these events, the U.S. government produced two important documents – the timing of which couldn’t be more appropriate considering current trends in space and strategic defense.  In January, the Department of Defense released its 2019 Missile Defense Review – followed shortly thereafter in February with the Defense Intelligence Agency’s report entitled Challenges to Security in Space.  The Missile Defense Review broadly lays out the DoD policy vision and challenges in missile defense, while DIA’s report provides an unclassified assessment of key concerns, threats, and issues regarding security in space.

Two things are key to take away from both documents.  Number one is the alarming technological pace of peer competitors in designing, testing and fielding their strategic defense and space capabilities.  Clearly, China’s space and strategic efforts stand out, exemplified by head-turning achievements like their new Moon Lander.

Number two is the growing imperative to plan, develop and test platforms and counter-measures that effectively and accurately address the realities of space security and strategic defense in the 21st Century.  Where success in a real-life scenario or circumstance is dependent on effective testing and preparation, that advance work is most productive when it is realistic, accurate and relevant to the actual effort being addressed.  For those who have served in a military uniform, it is why timeless aphorisms like “The more you sweat in training, the less you bleed in combat” – or – “Train like you fight” not only resonate, but serve an important purpose.  For those who’ve played organized sports, it may simply be “Practice how you play.” From a strategic defense perspective, the appropriate phase may be “test to the threat.”

Nowhere is the need to test more effectively, and more accurately, more critical than in the area of missile defense.  Simply, it is imperative that the U.S. continues to conduct missile defense testing in a way that – while perhaps unconventional – uses models, vehicles and targets that accurately mimic the capabilities actually being developed and operationalized by our adversaries.  For example, targets should be used that – as best as technology, capacity and cost can replicate – incorporate the same physics of flight, the same signatures, the same profiles, size, and characteristics as those either being developed or used by our adversaries.

Not only are space and strategic defense issues becoming more closely intertwined, but they are also marked by a heightened dynamism, accelerated development, a revolution in innovation, and a renaissance in risk.  All of this necessitates new, adaptive, and flexible thinking about how to anticipate, match – and hopefully overmatch – our opponents.

With peer competitors and hostile states quickly building and buying everything from hypersonic missiles to space-based systems to disable our defenses – the need to answer their capabilities with accurate and frequent testing is pressing.  In fact, the 2019 Missile Defense Review – highlighting the intents and approach of the Missile Defense Agency – recognizes this imperative and makes these points abundantly clear:

Given the worsening missile threat environment, DoD must prioritize speed of delivery, continuous adaptation, and deliver enhanced performance at the speed of relevance. To do so, DoD must adopt processes and cultures that enable MDA and the Services to streamline and refine acquisition processes, ensure flexibility in the development, testing, and fielding of missile defense, and swiftly adapt systems once fielded.

DoD and MDA will pursue a rigorous test program that enables us to counter evolving offensive missile threats, to include increasing the frequency of test events given the speed of adversary innovation.

Moreover, accurately and frequently testing against threats as they currently exist in form (and as our adversaries are actually designing them) may be the critical factor in effectively preparing for, and ultimately preventing, a hostile strategic strike against the U.S.  In balancing requirements and capabilities with limited resources, the burgeoning commercial launch industry may offer ways to achieve greater frequency of missile defense tests that provide a more precise modeling of the threat.

The fundamental lesson is clear: preparation – be it training, war-gaming, simulation or testing – should be conducted in a way that closely matches the real event.  In the context of strategic national security, if we as a Nation are going to spend precious resources on fielding the best capabilities to challenge our competitors – whether in space or on missile defense – we should encourage and continue the use of technologies that most closely simulate the platforms of our adversaries.  To put it another way – we need to test to the threat – our national security depends on it.

This article by Steve Mosteiro originally appeared at Real Clear Defense. This article first appeared in 2019.