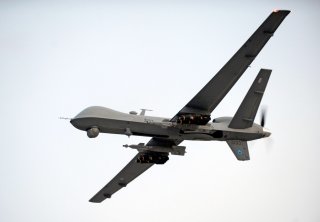 Non-stealthy, high-altitude, long-endurance Unmanned Aerial Vehicles (UAVs) have been instrumental to counterterrorism and counter-insurgency operations of the last decades, but a renewal of great power competition promises to change their roles in future conflicts.

Adversaries like Russia and China strive to exploit temporal advantage, for example by achieving rapid military gains before the United States or its allies can implement effective responses. To prevent such fait accompli, the Center for Strategic and Budgetary Assessments recently articulated the concept of deterrence by detection: fleets of UAVs maintaining persistent Intelligence, Surveillance, Reconnaissance (ISR) orbits over potential conflict areas, such as the South China Sea or Eastern Europe. The core mechanism of deterrence by detection is that potential aggressors, knowing that they are being observed in the “court of global public opinion,” will be less likely to initiate military actions. Historical precedents might lend credibility to the effectiveness of deterrence by detection, but the approach may prove hardly sufficient when applied to the kinds of aggressive maneuvers witnessed in the emerging threat environment.

The tactics frequently employed by great power rivals can make it difficult to ascertain who and what is seen from the vantage point of Medium- or High-Altitude, Long-Endurance UAVs (MALE or HALE, respectively). Aggressive maneuvers might be conducted under disguise—for example, by deploying the coast guard or fishing boats to pursue expansionist plans, or by hiding the affiliation of armed forces. Various objectives may also be achieved indirectly by exploiting local insurgencies whose alignments are not always clear. Ultimately, detection by UAVs may be evaded by using electronic warfare tools to jam, spoof, or disrupt UAV data links, targeting either the remote piloted aircraft or satellite communications. The net result of these and other tactics is a general obfuscation of the battlespace, which orbiting MALE or HALE UAVs conducting ISR missions are unlikely to mitigate significantly on their own.

As outlined in the deterrence-by-detection concept, in general detection need not be fully accurate to be effective: merely suggestive evidence could be sufficient to put pressure on an adversary. However, America’s competitors have become highly skilled at conducting sophisticated information operations to alter the narrative of conflicts. The ambiguity afforded by imperfect detection represents an ideal opportunity for adversaries to manipulate information and thereby mask their involvement.

This ambiguity is further exacerbated by the adversaries’ propensity for small-scale, hybrid tactics that aim to avoid escalation—ultimately allowing them to prolong military campaigns even when their involvement is known. In Eastern Ukraine, the Organization for Security and Cooperation in Europe (OSCE) maintained a drone surveillance program as part of its Special Monitoring Mission (SMM) to observe ceasefire conditions following the Minsk agreements. Yet despite a marked reduction in hostilities, the SMM continues to this day to report numerous daily violations of the treaty, and OSCE drones have been attacked—by Russia-aligned units—on several occasions.

While this case illustrates that adversaries under surveillance are sometimes willing to risk being exposed, some form of exposure may even be useful to an adversary whose strategy is based on coercion—for a recent example, consider the harassment of Filipino fishermen by Chinese maritime patrols. In cases like this, it might be surmised that persistent ISR could amplify the threat signals sent by an adversary by putting the spotlight on even relatively small incursions.

To be clear, it is not that a strategy of persistent ISR by a fleet of UAVs cannot contribute to deterrence, but rather that it should be planned with the current modus operandi of great-power rivals in mind. Two promising avenues to make effective use of the ISR capabilities of long-endurance UAVs might be to also improve networked surveillance capabilities and to keep emphasizing clear and credible red lines.

As for clear red lines, these may need to be more strongly asserted to bolster deterrence in the current renewed era of great power competition. In the case of the OSCE drone program, it is possible that a lack of clarity in the Minsk accords and the common treaty violations observed via other means compromised the deterrent value of airborne ISR by making it obvious that certain types of aggressive maneuvers would likely be tolerated anyway. Accordingly, the visibly high tolerance levels would have contributed to strengthening the adversary’s belief that they could continue unperturbed by persistent monitoring efforts.

Jasmin Léveillé writes from the Washington Metropolitan Area. He has worked for most of the last decade on military research related to artificial intelligence and UAVs.