Deterrence Secure? The Air Force Insists Its Nuclear Missiles and Bombers Are Ready Despite Coronavirus 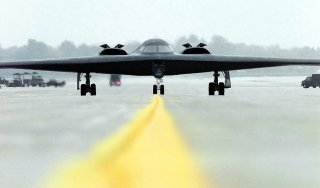 (Washington D.C.) U.S. B-2 stealth bombers and nuclear armed ICBMs are ready to attack and defend in minutes, should America be suddenly catapulted into a massive, great-power war -- despite the perils, distractions and challenges of COVID 19, senior Air Force officials said.

“Rest assured, we have taken the necessary steps to make sure our bomber and ICBM forces are ready to go and can reach any target on the planet at any time,” Gen. Tim Ray, Air Force Global Strike Commander, said in an Air Force statement.

Crews manning the U.S. nuclear arsenal, for instance, have implemented some measures of distancing and isolation, yet in a manner that preserves their crucial command and control systems, enabling them to instantly respond to attack if needed. U.S. Intercontinental Ballistic Missiles, which might roughly take a half-hour or less to travel through space to a target, could quickly obliterate any location launching nuclear attacks on the U.S. It is precisely this kind of assured retaliatory destruction which, according to the Pentagon’s strategic nuclear posture… keeps the peace. U.S. ICBMs stand ready in weapons silos in an expansive area in the Western part of the country including Montana and Wyoming. For all of these reasons and more, it goes without saying that the Air Force would push to ensure these weapons were ready, under any circumstances.

Ray’s comments seem designed to send a clear message to adversaries, suggesting that the COVID crisis does not make the U.S. vulnerable to attack, should rivals seek to take advantage of the current circumstance..

Operations involving the Air Force’s nuclear weapons arsenal and bomber fleet continue, Ray explained. Regarding nuclear weapons, this amounts to readiness drills, training and other kinds of measures intended to ensure force readiness. When it comes to the Air Force’s stealth bomber fleet, intended to ensure an undetected first-strike upon enemies should that be needed, forward positioned assets and exercises are ongoing.

As recently as March of this year, the Air Force deployed a task force of B-2 bombers to Portugal in support of U.S. European Command. An Air Force report explained that the forward positioned bombers, from 131st Bomb Wing at Whiteman Air Force Base, Missouri, are conducting theater integration and flying training missions from various installations across the European Continent.

A Bomber Task Force deployment of B-2 Spirit stealth bomber aircraft from the 509th Bomb Wing and the 131st Bomb Wing, Whiteman Air Base, Missouri, arrived at Lajes Field, Azores, Portugal, on Mar. 9, 2020 for a deployment to conduct theater integration,

European integration, among other things, doubtless refers to exercises intended to interoperate and network U.S. stealth bombers with allied systems and technologies on the continent. While the presence of ICMBs is of course somewhat self-evident, B-2s have a particular and at times complex deterrence-oriented mission set. They can of course drop nuclear weapons should they be called upon to do that by commanders, yet at the same time B-2s are engineered with a decided conventional warfare mission. The stealth bombers are intended to elude enemy radar in order to find and destroy enemy air defenses, thus opening up an air corridor for other attack warfare platforms to attack and conduct missions. This mission helps assure adversaries that they are by no means impenetrable to attacks from fighter jets, long-range missions and other weapons of key strategic value. While first emerging decades ago, the B-2 has continuously been modernized by Air Force weapons developers. The stealth platform has been receiving new digital cockpit technology, faster computer processors, improved weapons applications and new sensors able to detect the location of enemy air defenses.