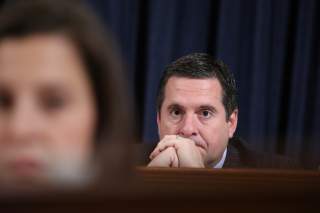 Rep. Devin Nunes says that a book from the co-founders of Fusion GPS shows that the opposition research firm investigated him in 2018 as retaliation for his work to reveal that the infamous Steele dossier was funded by Democrats.

“They actively obstructed justice by disrupting multiple congressional investigations and retaliated against me for revealing that the Steele dossier was funded by the Democrats,” Nunes said in a statement to the Daily Caller News Foundation in response to revelations in “Crime in Progress,” written by Fusion GPS co-founders Glenn Simpson and Peter Fritsch.

In the book, Simpson and Fritsch reveal for the first time that they conducted opposition research against Nunes in 2018 during his congressional reelection bid.

Simpson and Fritsch are highly critical of Nunes throughout the book. They express particular frustration at Nunes’ efforts to obtain Fusion GPS’s bank records in October 2017. Those records revealed that the law firm for the Democratic National Committee (DNC) and Clinton campaign paid Fusion GPS more than $1 million in 2016 for an investigation of President Donald Trump.

In “Crime in Progress,” Simpson and Fritsch wrote that they hoped to keep the identity of their dossier clients for as long as possible.

Simpson and Fritsch wrote that Fusion “ordinarily didn’t work on congressional races” but decided to investigate Nunes, in part because the California Republican was “a threat to [former special counsel Robert] Mueller’s ability to do his job.”

They refer to Nunes as “a rabid conspiracy theorist who turned the crank on the GOP’s anti-Mueller fog machine.”

“Fusion had no illusions about being able to topple Nunes, but the notion of digging into his record made many at the firm salivate,” they wrote.

Simpson and Fritsch wrote they obtained a copy of the DNC’s research of Nunes. They said the material was “disappointing,” so they launched a public records search of their own.

In the book, Simpson and Fritsch indicate they dug up information about a winery Nunes owns in the Napa Valley, as well as campaign expenditures for various fundraising events.

The Fresno Bee reported some of the information cited in “Crime in Progress,” though Simpson and Fritsch do not say they provided it to the newspaper.

Nunes sued Fusion GPS and a liberal nonprofit group called the Campaign for Accountability on Sept. 4 for racketeering, accusing the two organizations of working to “joint and systematic effort to intimidate, harass, threaten, influence, interfere with, impede, and ultimately to derail” his investigation of the Steele dossier.

The DCNF reported in August that the watchdog, Campaign for Accountability (CfA), paid Fusion nearly $140,000 in 2018. Nunes was one of CfA’s biggest congressional targets.

CfA denied hiring Fusion GPS to investigate Nunes. But there are similarities between the information that Fusion dug up on Nunes and ethics complaints that CfA filed against the Republican.