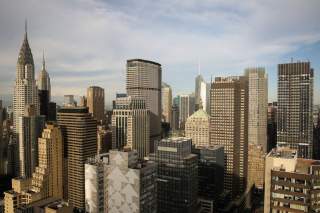 We were warned. After September 11, 2001, historian Stephen Ambrose told us what to do.

“One of the first things you learn in the Army is that, when you and your fellow soldiers are within range of enemy artillery, rifle fire, or bombs, don’t bunch up,” wrote Ambrose in the Wall Street Journal. Now that the U.S. was under attack from terrorists, Ambrose urged the nation as a whole to learn the same lesson: “don’t bunch up.” “In this age of electronic revolution,” he noted, “it is no longer necessary to pack so many people and office into such small space as lower Manhattan.”

Ambrose’s advice was ignored. Manhattan’s population has grown by 100,000 people since 2001. Fitting this number of people on a 23‐​square‐​mile island is only possible because of transit systems that force people to pack themselves into buses and railcars.

Now, we are getting another lesson. Due to a novel virus, we are told to “socially distance” ourselves. But no one is telling us to drive our cars instead of riding transit. Instead, the transit agencies are still operating and giving out platitudes like we’re “wiping down the handrails” every day. Seattle’s Sound Transit is firmly responding to the crisis by “putting posters on vehicles reminding everyone” to wash their hands. San Francisco BART says it is running ten‐​car trains all day so people can stand as far from one another as possible.

It’s not just transit. The 9/11 attack had no effect on urban planners’ demands that we pack ourselves into denser and denser cities. Just last week, an affiliate of Smart Growth America issued a report saying that we should deal with congestion through densification which, the report admitted, would make congestion worse. No doubt the same organization is now coming up with some spin claiming that we would all be immune to the coronavirus if only we lived in denser cities.

Densities and transit‐​dependence also makes us more vulnerable to natural disasters. When Hurricane Katrina hit New Orleans, 1,200 people died, mostly because New Orleans had the second‐​lowest rate of auto ownership (next to New York) of any major city in the country. At the time, some urban planners had the gall to say that fewer people would have died if auto ownership rates had been even lower. In fact, a few weeks later, Hurricane Rita hit Houston, which has much higher auto ownership rates. Four million people successfully evacuated, nearly all by car, and fatalities were only a tenth of Katrina’s.

Instead, urban planners want to impose policies on us to get people on transit and into high‐​density housing. They want urban‐​growth boundaries that make land too expensive for single‐​family housing. They want to dedicate arterial lanes to buses and bicycles so the increased traffic congestion will force people to stop driving. They aren’t even sure why they want these things, but they’ve managed to convince many people that single‐​family homes and private automobiles are wasteful and evil despite the fact that both are more energy efficient than the alternatives of multifamily housing and transit.

Urban planners have been wrong about almost all of their grandiose plans in the past. They once cleared “slums” that forced the people who lived in them to move to even lower‐​quality housing elsewhere. They once built high‐​rises for low‐​income people that proved so unlivable that some were torn down after as little as 17 years. They once tried to reduce toxic air pollution by increasing traffic congestion that actually increased that pollution. We should stop listening to them.

Despite the reassurances of transit agencies that have irresponsibly encouraged people to bunch up on their vehicles, transit ridership is down by 50 percent or more in many cities. That’s a good thing, but Amtrak and transit agencies are already asking for bailouts to make up for their loss of fare revenues, even though existing subsidies make up more than three‐​quarters of transit funds and half of Amtrak’s funds so they could easily deal with reduced ridership simply by reducing service.

The American Public Transportation Association has sent out a notice to its members asking them to support “$12.875 billion [in federal funding] for public transit to offset direct costs and revenue losses of COVID-19.” That would effectively double federal subsidies to an industry whose customer base has been declining for years.

The federal government has already said that transit agencies can spend federal funds dedicated to capital improvements on operating costs instead so they can continue to operate empty buses and trains. Everyone wants a bailout, but transit agencies, whose ridership has fallen in each if the past five years, are least deserving of one.

Don’t bail out government‐​subsidized transit. Better to end the subsidies completely and let the agencies wither and die. Instead, help people who don’t have automobiles buy fuel‐​efficient cars so they can drive in vehicles that are safe from novel viruses. Give transportation vouchers to people who can’t drive so they can use taxis, ride‐​hailing services, or private transit while encouraging transportation providers (at least during times like these) to sterilize the vehicles after each use.

These policies will cost a lot less than the $54 billion a year we are spending on urban transit, which is a blight on our society that most cities, other than New York, don’t even need. And New York won’t need it either once people and jobs stop bunching up and move out to lower‐​density areas, as happened years ago in Chicago and other big cities.

Next, stop encouraging densification. Stop subsidizing transit‐​oriented developments. Stop demanding that single‐​family neighborhoods be rezoned for denser housing (which, paradoxically, will actually make housing less affordable). Abolish urban‐​growth boundaries and other restrictions on development at the urban fringe. If someone wants to live in a high‐​density building, that’s fine, but let the market determine how people live, not urban planning dogma based on a crazy lady who was right to question the high‐​rise housing projects but wrong to think that, because she liked Greenwich Village, it was the model for all urban life.