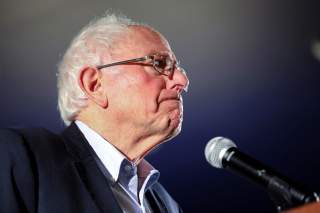 2020 presidential candidate Elizabeth Warren promised details of her private dinner with fellow candidate Bernie Sanders would be kept private, but the alleged details are leaking.

Sanders allegedly told Warren in a private December 2018 meeting that he did not believe a woman could win the presidential election, CNN reported Monday. However, the publication cited four anonymous sources for the article: two familiar with the meeting, and two who said they spoke with Warren right after. Sanders denied the report’s details.

Video footage from a South by Southwest conference in Austin, Texas, shows that Warren once said she wanted her conversation with Sanders to remain private.

“Not long ago, I’m told you went to see him and talk about the two of you possibly running for president, each of you running for president,” moderator and Time magazine contributor Anand Giridharadas asked Warren. “Is it incorrect that he discouraged you from running and if so on what grounds?”

“So Bernie and I had a private dinner,” Warren said. “Uh … and … my view is that dinner stays private.”

Sanders told CNN that “it is ludicrous to believe that at the same meeting where Elizabeth Warren told me she was going to run for president, I would tell her that a woman couldn’t win.”

“It’s sad that, three weeks before the Iowa caucus and a year after that private conversation, staff who weren’t in the room are lying about what happened,” the Vermont senator added. “What I did say that night was that Donald Trump is a sexist, a racist and a liar who would weaponize whatever he could. Do I believe a woman can win in 2020? Of course! After all, Hillary Clinton beat Donald Trump by 3 million votes in 2016.”

The Warren campaign did not respond to a request for comment from the Daily Caller News Foundation.

The Massachusetts senator has referenced similar comments from critics who said that she could not win elections because she was a woman.

“I heard this over and over again: ‘Don’t run. A woman can’t win here. Not yet.’ I heard from a lot of women who were afraid that it would be too painful to see another one of us go up against him and lose. That it would set all of us back,” Warren wrote in a March 2019 post to Medium.

When I thought about jumping into the Senate race in 2012, I heard this over and over again: “Don’t run. A woman can’t win here. Not yet.”

We proved the naysayers wrong. We won by 7.5 points. https://t.co/aFmB1QubT1