Did Biden Give Putin a ‘Green Light’ to Invade Ukraine? 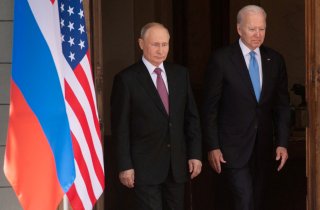 After apparently drawing a distinction between a potential Russian “incursion” and an “invasion” of Ukraine during a news conference on Wednesday, President Joe Biden was accused by Ukrainian officials of giving Russian president Vladimir Putin a “green light” to invade. Biden’s comment raises a number of pressing questions about his administration’s approach to Russia.

Can the United States and Russia reach an eleventh-hour deal to delay or prevent what many believe is an imminent Russian invasion of Ukraine? Is the Biden administration appeasing Russia or taking a realistic stance? What should be made by the members of Congress who recently traveled to Kiev and called for additional military aid for Ukraine and “crippling” sanctions against Russia?

Added to this already complex equation is a report by Russia’s TASS news agency on President Biden’s willingness to “work out something” regarding Russia’s opposition to American strategic weapons being deployed in Ukraine. While Biden rejected Moscow’s demand to block Ukrainian membership in NATO, he appears open to making concessions on strategic weapons in order to alleviate some of Russia’s concerns.

The TASS report highlighted Biden’s comments on the matter: “The two things [Russian President Vladimir Putin] said to me that he wants … one is that Ukraine will never be a part of NATO. And two, that there will be no strategic weapons in Ukraine. We can work out something on the second piece.” Biden noted that Russia would have to commit to taking reciprocal steps for any agreement to be reached.

Biden’s recent comments have left some Ukrainian officials “shocked” and upset, according to CNN. Ukrainian officials are particularly concerned that his distinction between an “incursion” and an “invasion” will invite Russia to invade Ukraine. Some also fear that the United States may seek a deal with Russia without Ukrainian involvement. However, Secretary of State Antony Blinken has made it clear that he will not give his Russian counterpart a written response to Russia’s sweeping demands when they meet on Friday.

Not long after Wednesday’s press conference, the White House released a public statement that attempted to clarify President Biden’s remarks on the crisis in Ukraine.

"President Biden has been clear with the Russian President: If any Russian military forces move across the Ukrainian border, that's a renewed invasion, and it will be met with a swift, severe, and united response from the United States and our Allies," the statement said. The world will soon find out if Vladimir Putin saw Biden’s comment as a “green light.”