Did China Just Threaten a War Against America? 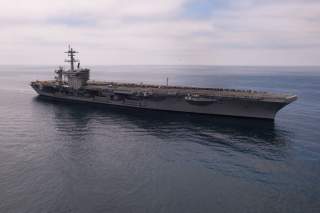 This unique account of Chinese nationalism and its central place in China’s resurgence is one of the book’s greatest strengths. It may also prove controversial.

In a chilling editorial published May 29th, the authoritative Chinese newspaper People’s Daily used a significant phrase after demanding the U.S. respect China’s economic interests: “don’t say I didn’t warn you.”[1] The People’s Daily has issued this warning before, such as in 1962 before China went to war with India, and in 1979 before China went to war with Vietnam. To the informed reader, there could be no mistake about it: China was signaling that it had no intentions of giving in on trade.

Chinese official pronouncements, with their interminable sloganeering, are mind-numbing to read. However, they are essential to our understanding of international relations. Few people have read them more closely than the historian and strategist Jonathan D.T. Ward. In his new book, China’s Vision of Victory, Ward combines Chinese work reports, propaganda editorials, nationalist films, and everyday conversations to present a uniquely comprehensive snapshot of China’s worldview and plans. This important book belongs on the shelf of every student of China.

Ward, who has lived in China extensively and conducted research in rarely-accessed Chinese archives while reading for an Oxford University doctorate, argues the key to understanding China’s worldview is the vision of the “Great Rejuvenation of the Chinese Nation.”[2] China is not merely trying to rise; it hopes to return to what Chinese leaders see as its rightful place as a large, prosperous, and powerful country, a place it occupied for much of what they call their “5,000-year history.”[3] Through a close reading of Chinese statements, Ward provides a unique account of Chinese ambitions. In contrast to many other recent books on China, such as Elizabeth Economy’s The Third Revolution, which emphasizes the role of increasingly dictatorial Chinese President Xi Jinping, Ward argues China’s dedication to the “resurrection” of its position as a preeminent global power has its roots in the early twentieth century.[4] Chinese revanchist nationalism pre-dates communism and had its first significant expressions in the Chinese Revolution of 1911 and the May Fourth Movement of 1919, early Chinese attempts to overcome Western dominance. (The Communists still commemorate both anti-Western revolutions).[5] The founder of the People’s Republic of China, Mao Zedong, was not the originator of, but rather an heir to, the Chinese revolutionary tradition that was always tied to China’s vision of a return to its rightful place, according to Ward.[6] Xi Jinping’s contemporary Chinese nationalism is likewise “a return to the founding principles of modern China.”[7]

This unique account of Chinese nationalism and its central place in China’s resurgence is one of the book’s greatest strengths. It may also prove controversial. It is difficult to determine whether China’s leaders actually have a penchant for far-sighted strategizing rooted in ancient wisdom and deep national feeling or are simply paying lip-service to history while muddling through and struggling to address dangerous contradictions within their regime. Westerners have certainly had a tendency to exaggerate Chinese time horizons. In the 1970s, Chinese Premier Zhou Enlai was asked about the influence of the French Revolution of 1789. Zhou famously replied: “Too early to say.” Far from indicating he drew conclusions only after super-human, centuries-long analysis, though, Zhou thought he was being asked about the recent French student protests of 1968. Richard Nixon’s translator, who heard Zhou answer, has said it was a misunderstanding “too delicious” to correct.[8] Western thought leaders continue to imagine China’s perspective is immense. Consider Harvard political scientist Graham T. Allison, for example, who in his popular 2017 book argued Chinese leaders have a more “expansive sense of time” than their Western counterparts.[9]

Ward never mistranslates or exaggerates. Whether Chinese leaders are actually relying on ancient wisdom or simply dressing up their biases as such, they certainly believe their contemporary political movement is also an ancient one in key ways. And, as Ward demonstrates throughout the book, China’s leaders identify the unique characteristics of decades, and plot to exploit them in their plans and strategies. There is no better example of this than the Belt and Road Initiative, a massive international economic project intended to culminate in 2049, the hundredth anniversary of Communist victory on the Chinese mainland. Rather than a vague account of Chinese long-termism, Ward provides a detailed account of China’s intentionally timed grand strategy, meant to return China to its rightful place in the world in time for its 2049 centenary.

Again, following Chinese official statements closely, Ward argues that the foundation of China’s rejuvenation project is economic. China’s immediate goal is to be prosperous. Ward emphasizes that Chinese initiatives such as the Belt and Road Initiative fundamentally attempt to protect and expand Chinese access to natural resources and markets. However, he also argues compellingly, based on the history of Chinese diplomacy, that major Chinese plans from the “Chinese Dream” to the “Great Rejuvenation” are also “fundamentally military endeavors.”[10] After all, China has repeatedly cited its so-called “Five Principles of Peaceful Coexistence” to justify aggressive wars against its neighbors. China’s economic rise has given it the resources to arm itself.[11] As the age-old Chinese aphorism states: “A rich country, a strong military.”[12]

This places the world at a new inflection point no less significant than when it initially engaged with China as the state “reformed and opened up” beginning in 1978. Chinese leaders themselves consider 2000 to 2020 a key “period of strategic opportunity.”[13] The new question for the West, however, is not how to deal with China’s exports and markets, but how to deal with China’s fleets and armies. The economic rise of China is longstanding, although, as the ongoing U.S.-China trade war demonstrates, it remains contested in key ways. The ramifications of China’s military rise, however, have yet to play out. Chinese leaders hope to have a military that is “second to none” by the middle of this century.[14] Such military preeminence would fundamentally alter the global balance of power—at the expense of the United States and its allies.

Ward does not shy away from proposing how America should respond to this challenge. He is unambiguous that if America does not maintain its economic supremacy, a network of alliances, and military power, China will destroy the world order as we know it. In contrast to commentators who focus on China’s relative rise, Ward emphasizes that the U.S. must focus on sustaining and expanding American power. The key question, in his mind, is how much power will be ceded to China in the future. The American strategy of “engage but hedge,” Ward declares, “has failed” and brought the U.S. “to the brink of the end of an American-led world.”[15]

In a compelling foreword, the former commander of the Pacific Fleet, retired Admiral Scott Swift, argues this book justifies a new American grand strategy to deal with China. Not all Americans will agree with this approach; “engage but hedge” still has many defenders in the foreign policy establishment. But China’s Vision of Victory represents the most compelling case yet to replace it. After reading this book, its defenders cannot claim they were not warned about the risks they face.

T.S. Allen is a U.S. Army officer. The views expressed in this article are those of the author and do not reflect the official policy or position of the U.S. Army, the Department of Defense, or the U.S. Government.

This article by T.S. Allen first appeared in Strategy Bridge in September 2019.