Did Chuck Schumer and Kirsten Gillibrand Try to Double-Dip on Subsidies? 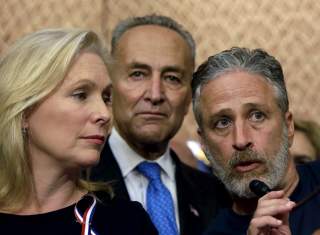 The Federal Communications Commission (FCC) faced criticism from Capitol Hill last week when a bipartisan letter from the New York delegation complained that the state has been unfairly excluded from participating in the agency’s new $20 billion broadband initiative. Sens. Chuck Schumer (D-NY) and Kirsten Gillibrand (D-NY) accused the agency of “plotting” against the state, while some journalists have characterized this incident as part of a “petty” campaign against states that have opposed the agency or the Trump administration more generally.

But as usual, a deeper look reveals that the real story does not quite match the sound bite. The new initiative targets areas that lack broadband. It thus excludes areas that received buildout funding during the agency’s earlier CAF-II auction, regardless of state. The allegedly disproportionate effect stems in part from the fact that New York received more favorable treatment in that earlier auction — and caving to Schumer and Gillibrand’s request would allow New York to impermissibly double-dip into limited agency funds.

At issue is the Rural Digital Opportunity Fund, which will allocate $20.4 billion over ten years to close America’s digital divide. The Fund builds on the success of the agency’s earlier Connect America Fund Phase II (CAF-II) initiative, which similarly awarded subsidies to companies willing to build networks in unserved areas. During CAF-II, the FCC offered subsidies to incumbent telephone companies to build next-generation networks in high-cost areas. In areas where the incumbent declined the subsidy and in certain other areas, the agency then conducted reverse auctions to induce other companies to serve these rural areas.

Everywhere, that is, except New York, which sought — and received — a special waiver during the CAF-II auction process. The incumbent, Verizon, declined the subsidies offered to serve upstate New York. Rather than offering those subsidies on a reverse-auction basis as in other states, the agency agreed to give the state control of those dollars. New York had recently launched its own New NY Broadband Program. The FCC allowed New York to use CAF-II money earmarked for New York in conjunction with the state initiative, in the hope that this unique arrangement would close the state’s digital divide more quickly.

The present dispute stems from the relationship between the Rural Digital Opportunity Fund and the earlier CAF-II effort. Because the new fund focuses on unserved areas, it excludes areas where an existing provider offers 25 Megabyte per second service, as well as areas where the government has already awarded subsidies from another source in exchange for a commitment to build such broadband networks. This includes areas funded by the Department of Agriculture’s ReConnect Program, the FCC’s Rural Broadband Experiments, and, significantly, the CAF-II auction.

New York’s congressional delegation claims this last restriction is unfair, as it excludes areas funded or eligible for funding through the New NY Broadband Program. But this argument ignores the fact that the FCC has already allocated money to fund network construction in these areas. The CAF-II auction made sums available on a reverse auction basis to close the broadband gap in much of the country. Bidders who won those auctions accepted subsidies in exchange for service commitments, effectively taking those areas out of the “unserved areas” category. Similarly, New York accepted all the funds allocated to provide service in that state — $170 million, or approximately eight percent of the total money available nationwide. In essence, it “won” the auction for the unserved areas of New York (at the maximum possible subsidy level). Allowing New York to collect federal money again for areas that the FCC already subsidized would constitute impermissible double-dipping and would grant New York a perk denied to other states.

There is one exception to this restriction. Census blocks where incumbent carriers accepted CAF-II support, and thus did not go to auction, are eligible for Rural Digital Opportunity Fund support. The FCC explained that this is because it has gathered more reliable and granular data about broadband availability in those areas as part of the CAF-II process. Notably, that would include any such areas in New York, as noted on this map. In these areas, funds would be limited to wiring unserved households within those census blocks, consistent with the Commission’s overall belief that it is inefficient to subsidize providers where service already exists. Thus, the idea that the FCC is “plotting” against New York, for political reasons or otherwise, is false.

The Rural Digital Opportunity Fund is designed to address areas that the CAF-II auctions and other earlier initiatives failed to fund. New York took special steps to make sure that it received every dollar that the FCC made available through CAF-II to wire New York, steps that were unavailable to other states. I do not fault New York’s congressional delegation for seeking additional funding — after all, seeking public services for their constituents is part of their job. But the agency is right to prevent the state from double-dipping. Other states will receive Rural Digital Opportunity funding for areas that were not served by the CAF-II auctions. Having received special treatment in that auction, New York should not be allowed benefit again by becoming the only state able to tap both funds to serve the same area.

This article first appeared at AEI.