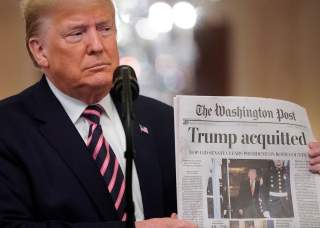 As the impeachment process of Donald Trump drew to a close, and the Republican-held Senate inevitably found the president not guilty, it was difficult to remember a more fractured moment in US political history.

There are plenty to choose from. And yet, in the early 21st century, the nation’s capacity to perceive any political matter collectively, let alone one as divisive as a presidential impeachment trial, has been made especially difficult. Such a development has come about in no small part due to the changing way in which Americans get their news.

Beyond boasts of exoneration and accusations of a “witch-hunt”, the 45th president will go down in the annals of American history as only the third to be impeached. Impeachment is the nuclear option for dealing with presidential high crimes or misdemeanours, and categorically should not be used for partisan gain. Doing so inevitably undermines its purpose and weakens impact. Yet partisan Washington reality may not allow for rational objectivity.

The impeachment trial of Bill Clinton, based on accusations of perjury and obstruction of justice, came about after the president lied about his personal indiscretions. With the culture wars in full swing, 1990s America was a divided place and, after his acquittal by the Senate, Clinton gained popularity during the rest of his term

Trump may also experience a post-acquittal sympathy bounce. As with Clinton before him, some supporters disliked his accusers more than they disapproved of their president’s actions.

One notable difference between the two impeachment trials is the amount and variation of information available to the public. The Clinton affair was the first online political scandal, in that the news broke on the internet via the Drudge Report and was subsequently picked up by the mainstream media. But, however divided the nation was, the variation of information on offer was finite and therefore the public was at least looking at the same hymn sheet, if not singing from it.

In 2020, this is no longer the case. There have always been dishonest politicians, and there have always been biased media sources. However, it has now become acceptable for those at the highest levels of public life in the US to repeatedly offer falsehoods. In turn, it has become the norm for sympathetic media outlets to repeat and reinforce those falsehoods. Overall, social media platforms are not sufficiently proactive in counteracting the spread of fake news.

The result is that a presidential impeachment carried out in the early 21st century simply cannot carry the gravitas of previous examples. Tribal political partisanship has become normalised to such an extent that even those who are troubled by the actions of their party leader remain unconditionally loyal. With the notable exception of the senator Mitt Romney, the new normal in this hyper-partisan era is for the interests of the party to trump the interests of the country, whatever the cost.

This is dangerous and irresponsible in a number of ways. First, it sends a message to the public that lying repeatedly, and often blatantly, is acceptable. Second, it suggests that putting one’s country first is unnecessary. And finally, it undermines the seriousness of impeachment as a tool of government.

It should be the method of absolute last resort, and then engaged with meaningfully by all involved. And when it is, those allegations of high crimes or misdemeanours must be considered and voted on objectively.

All of this begs the question of “what now?” In the short term, Trump’s acquittal will do little to change public opinion on either the man himself or perceptions of his guilt in the Ukraine affair. His public approval ratings are consistent and the Democrats are left in the unenviable position of working out how to move forward in protecting the integrity of the 2020 election, without looking over zealous.

For every Democrat wringing their hands as they listened to Trump’s hubris-laden and divisive 2020 State of the Union speech on February 4, there was one of his supporters punching the air, all the more determined to show up on election day come November.

In the longer term, the outcome of this impeachment will have a range of negative consequences. The Democratic majority leader in the House of Representatives, Nancy Pelosi, warned of “normalised lawlessness”, amid legitimate concerns that an emboldened president may act increasingly without constraint. Such a development, highlighted decades earlier by the American historian Arthur Schlesinger, is not new, but history clearly demonstrates that those periods of presidential imperialism are fraught with peril for democracy and the nation.

Polarisation will reach new levels. In addition, there will be a thirst for revenge among Republicans against their Democrat opponents. And when the next impeachment trial takes place, the chances of Americans taking this most grave of constitutional procedures seriously are as low as their capacity to access unbiased information about it.