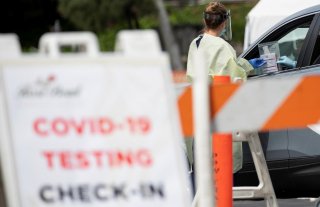 [See important update below about Maryland’s law following a communication from an official from that state’s health department. — W.O.]

Last week I published a piece observing that precautionary government regulation often undercuts the resilience the system is able to show when confronted with a new peril or emergency. The example I gave came from the many rules adopted in response to the menace of terrorism after 9/11, which turned out to make it harder to react when an entirely different kind of emergency — the current pandemic — placed sudden new stresses on areas from airport logistics to a banking system asked to handle an unplanned surge of small business loan requests.

Once you notice this pattern of regulation and resiliency you begin seeing it every day. Yesterday, in a piece of truly welcome news, it was announced that the Food and Drug Administration has approved the first at‐​home test for COVID-19, from laboratory giant LabCorp. At‐​home testing, with its potential for speed and convenience, holds great promise for making up lost time in the area the feds most thoroughly botched in responding to the pandemic; a version of it also figures in Bill Gates’ ambitious plans to combat the virus in Seattle and beyond. Early, limited supplies will initially be made available for two of the kinds of workers who need it most, health care staff and first responders, who will be able to obtain their results online with no need to go through a doctor’s office.

If you go to the LabCorp site promoting the new kit, however, you’ll notice a warning: “Not available in MD, NJ, NY, and RI.” As it happens, Maryland, New Jersey, New York, and Rhode Island are four of the states hardest‐​hit by the virus. As the Associated Press explains today: “Those states have laws prohibiting testing with at‐​home sample collection kits, according to LabCorp.” [Update: a Maryland health official says notwithstanding the AP description, his state’s law does not ban the home kit.]

Why? As a Maryland resident, I know only too well that my state’s legislature is like those in states like New York and New Jersey in having deep‐​seated interventionist and regulatory instincts. (These often bring it into conflict with Gov. Larry Hogan (R), who tends to favor a lighter touch.) But why ban home testing in the first place? This 2017 Technology Review article gives some background, following a controversy over an abortive plan to distribute free genetic tests to fans at a Baltimore Ravens game at M&T Stadium. It says “Maryland and New York’s laws are meant to protect consumers from companies making dubious claims about DNA tests and also make sure people receive proper advice and counseling from their doctors about their medical results.”

Who would ever have predicted that some future emergency might make it urgently useful for people to gain access to critical information about their own health status immediately without a doctor’s visit? Who, that is to say, besides “a lot of us”?

The Maryland legislature has already ended its abbreviated session for the year. Possibly its law on health emergencies, or those of the other states, will permit a gubernatorial decree suspending the application of this law. But wouldn’t it have been better for emergency preparedness not to have passed such a law to begin with?

[Update: Paul Celli, public health administrator for clinical and forensic laboratories at the Maryland Department of Health Office of Health Care Quality, writes to say “The AP article is incorrect.” Whatever may be the situation in the other three states, “Maryland is not banning this Pixel at‐​home collection device (it is not a test) for use at select Labcorp testing locations.” A Maryland legislative source points out that last year, state lawmakers approved and Gov. Hogan signed SB 495, a measure aimed at liberalizing access to medical testing by removing some of the restrictions in effect earlier. Mr. Celli writes that even before that change, rather than bar use of this particular test the state “probably would have exercised enforcement discretion in such cases where the company appears to be providing services pursuant to a physician or other authorized provider order for the test.”]

This article by Walter Olson first appeared in CATO on April 4, 2020.