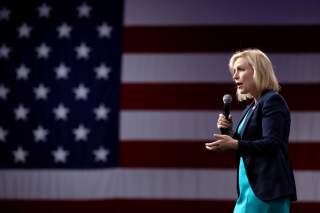 Kirsten Gillibrand’s presidential campaign may have been doomed from the start, women’s rights advocates say.

Some women’s rights leaders say that the New York senator encountered something of a backlash for being the first Senate Democrat to demand the resignation not quite two years ago of then-Sen. Al Franken (D-MN), who quit in disgrace amid accusations of sexual misconduct. The accusations against Franken, which came from eight women, included groping and unwanted kisses.

Gillibrand pulled out of the 2020 race late Wednesday, making her the first senator and the first woman to exit. She said early on that her campaign would center on fighting for policy solutions to problems that predominantly affect women and their economic and social equality.

Now, in an online message announcing the end of her campaign, she signaled that she will continue to fight those battles.

“Together we’ve taken on the fights that others wouldn’t. We’ve led the fights that we can’t afford to lose for women and families and moved the entire field along with us,” Gillibrand says in the video message.

Al Franken’s Crushing Betrayal of the Progressive Cause

“We have put the civil rights of women front and center and never backed down when it comes to valuing them … bringing issues like paid family leave from the back burner to the presidential debate stage.”

Gillibrand championed national parental paid leave that would allow any worker three months away from the job to adjust to parenthood, to care for an ailing family member or because of their own illness. She also made reproductive rights a major focus of her campaign.

During the second presidential debate, she challenged former Vice President Joe Biden about an op-ed he wrote in the 1980s that opposed a tax credit for assisting families with child-care costs. In it, Biden had mentioned “the deterioration of the family.”

During the first presidential debate in June, Gillibrand focused on abortion access and said, “Thirty states are trying to overturn Roe v. Wade right now and it is mind boggling to me that we are debating this at this stage in 2019 among Democrats whether women should have access to reproductive rights. I think we have to stop playing defense and start playing offense.”

Gillibrand also paid close attention to LGBTQ rights by releasing an in-depth plan to fight for policies that would improve LGBTQ people’s lives, such as prohibiting conversion therapy, improving health-care access for trans people, recognizing nonbinary people in identity documents, and reversing some of President Donald Trump’s rollbacks of Obama-era protections. She also spoke with the National Center for Transgender Equality to discuss her agenda for advancing transgender people’s rights.

I am so proud of this team and all we've accomplished. But I think it’s important to know how you can best serve.

To our supporters: Thank you, from the bottom of my heart. Now, let's go beat Donald Trump and win back the Senate.

A Politico article that came out in the fall of last year cited prominent donors across the country who said they would not donate or raise money for her because, they said, she was “duplicitous” and generally untrustworthy. The piece also noted “donors’ fondness for Franken.”

Tina Dupuy, one of the women who said Franken groped her while posing for a photo in 2009, wrote for The Atlantic, “We posed for the shot. He immediately put his hand on my waist, grabbing a handful of flesh. I froze. Then he squeezed. At least twice … It shrunk me. It’s like I was no longer a person, only ornamental. It said, ‘You don’t matter—and I do.'”

In November, before he resigned, Franken said, “I feel terribly that I’ve made some women feel badly and for that I am so sorry, and I want to make sure that never happens again.”

Franken has said the allegations were false and called for an independent investigation. In an interview with the New Yorker in July, he said he now regrets his decision to resign.

But dozens of senators called for his resignation. Even the top Democrat in the chamber, Senate Minority Leader Chuck Schumer (D-NY) pressured him to quit, according to the Washington Post.

But in the months that followed, outrage in the public and from his peers softened against Franken, in keeping with a wider societal phenomenon of men shunned early in the #MeToo era gradually being rehabilitated.

It did not help matters for Gillibrand that the New Yorker published an article last month revisiting the allegations.

The piece, which focused on the first allegation by a conservative talk-radio host who starred with Franken in a U.S.O. show in 2006, Leeann Tweeden, quoted various senators who said they regretted having called for his resignation. These included Sens. Patrick Leahy (D-VT), Angus King (I-ME), Tammy Duckworth (D-IL), Jeff Merkley (D-OR), and Tom Udall (D-NM), as well as former Sens. Heidi Keitkamp (D-ND) and Bill Nelson (D-FL).

Also quoted was former Senate Minority Leader Harry Reid, who said of Franken, “It’s terrible what happened to him. It was unfair.”

It’s possible Gillibrand would have exited the race early even without so many prominent Democrats and donors casting Franken as a victim, or even if critics hadn’t seemed eager to blame her in some part for his downfall.

But advocates for women’s equality say that the entire controversy almost certainly cast a shadow on her campaign. During her run, Gillibrand was frequently asked about the allegations and her decision in interviews. A campaign aide told the Huffington Post she was asked about Franken at least 24 times this year.

Toni Van Pelt, president of the National Organization for Women, told ThinkProgress about the end of Gillibrand’s campaign, “Senator Kristen Gillibrand has never been afraid to speak out, and her outspoken feminism made her a target during her presidential campaign.  Kristen Gillibrand should have been given the time to talk about the issues that matter to women and families instead of being constantly asked about Al Franken.  The system continues to be rigged against women who challenge the patriarchy, but we need more candidates like Kristen Gillibrand to take up the challenge, and win the race.”

Prominent political thinkers and advisers said it goes almost without saying that her call for Franken to resign unfairly tarnished her campaign.

“Gillibrand was blamed for Al Franken’s sabotage of his own career, and the ensuing misogynist resentment of her tanked her campaign,” Moira Donegan, A columnist for The Guardian, tweeted.

Lauren Rankin, a writer and clinic escort said following her exit, “She is not responsible for his bad behavior, and blaming her for it is loathsome.”

Casey Quinlan covers policy issues related to gender and sexuality. Her work has also been published in The Establishment, Bustle, Glamour, The Guardian, Teen Vogue, The Atlantic, and In These Times. They studied economic reporting, political reporting, and investigative journalism at the CUNY Graduate School of Journalism, where they graduated with an M.A. in business journalism.

This story was originally published on ThinkProgress.