Did Giuliani Pursue His Own Business Deals While Investigating in Ukraine? 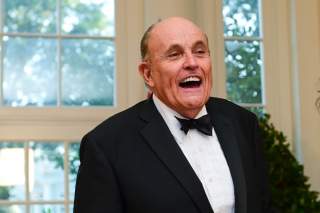 Giuliani was looking into financial agreements with members of the Ukrainian government during the time he was pushing for an investigation into the Bidens, documents The New York Times reviewed show. Giuliani has previously said he had no business with the country and that the documents were never finalized.

One of these business dealings reportedly got all the way to a retainer agreement, The NYT reported. Giuliani downplayed the business talks and said that a Ukrainian official was looking to hire him personally, according to an interview Wednesday. He did not agree to the idea but did spend a month looking into a different deal with Ukraine’s government, which he later rejected.

Giuliani added that it would have been “too complicated” and that he “never received a penny.” His actions have played a role in the ongoing impeachment inquiry into the president. The inquiry is based on an August whistleblower complaint that accused the president of pressuring Ukraine to look into former Vice President Joe Biden, his political rival.

Trump has denied quid pro quo and dismissed the impeachment inquiry. He has also denied sending Giuliani to Ukraine with the goal of pushing for an investigation.

“No, I didn’t direct him, but he is a warrior. He is a warrior,” Trump said in an interview with radio host Bill O’Reilly Tuesday. “I know that he was going to go to Ukraine and I think he cancelled the trip. But Rudy has other clients, other than me. He’s done a lot of work in Ukraine over the years.”

The FBI and prosecutors are currently investigating if Giuliani worked for the president while also working for Ukrainian officials, unnamed sources said, according to The NYT. A federal criminal investigation is ongoing into whether Trump’s personal lawyer played a role in getting rid of former U.S. Ambassador to Ukraine Marie L. Yovanovitch.