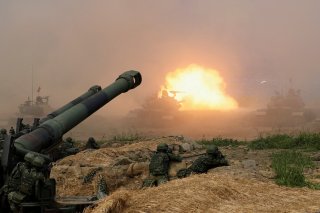 The U.S. sale of anti-ship missiles to Taiwan is unlikely to happen until 2025, according to a March 9 Naval Post article. China has made it increasingly clear that invasion of Taiwan is a matter of it, not win. Consequently, Taiwan needs all defenses in place as soon as possible.

The Biden administration explained to the Navy that operational and technical issues would delay their deployment.

But are the delays due to intimidation from Beijing?

The original  $2.37 billion deal to acquire four hundred RGM-84L-4 Harpoon Block II anti-ship missiles along with their containers and one hundred launchers in 2024 was signed last year.

“The sorts of survivable, low-profile and networked defenses that can survive an initial Chinese attack and be resilient and lethal for weeks or months,” Scott Harold, an analyst at RAND, told Forbes.

State Department officials approved the transfer in October, prior to the change in administration.

Last month, Chinese Communist Party authorities threatened to impose sanctions on defense contractors including Boeing, which manufactures the Harpoons through its McDonnell Douglas unit. China is Boeing’s largest foreign market. A Boeing representative said that questions about the sale should be directed to the U.S. government.

If China invaded Taiwan, then mobility equals survivability because moving targets can be harder for the enemy to detect and neutralize than static ones.

The Hsuing Feng series of missiles can be launched from semi-trailers that Taiwan’s defense ministry deems as not as mobile. Supersonic missiles might be able to hit their targets faster than subsonic missiles like the Harpoon, but they cost less and can be deployed in larger numbers.

It conducted a study last summer that found that the Republic of China Armed Forces needed to neutralize 50 percent of the PLA[N] ships in the event of an invasion based on a computer simulation.

Last spring, Taiwan’s Deputy Defense Minister Chang Che-ping said that its current stockpile would leave too many PLA[N] ships afloat in the event of an invasion. Presently, the PLA[N] has nineteen amphibious assault ships of various types, according to a recent report by the Congressional Research Service.

“Our inability to deliver needed capabilities to a key partner like Taiwan undermines any strategy being developed by the Administration, particularly one with an ultimate objective of deterrence,” Vic Mercado, the Trump administration’s Assistant Secretary of Defense for Strategy and a retired rear admiral, told the Center for Security Policy.

“The White House, the Congress, the Department of Defense (in particular, the Navy) and industry (Boeing) needs to understand in detail what went wrong, fix it and deliver this capability on the agreed timeline. A little long, but a start.  You can also say that in my previous capacity as the [Assistant Secretary of Defense], I was charged with overhauling the [Department of Defense]'s security cooperation policy to align it with the [National Defense Strategy] and great power competition,” Mercado said.

Planners must accelerate their delivery of this and other systems that Taiwan has yet to request like the Long-Range Anti-Ship Missile that can destroy ships at long range to help it achieve the goal of being an “indigestible porcupine.”

The delay means that Che-ping’s stated goal of being able to “destroy half of any enemy force by 2025” will not happen, and it coincides with the PLA’s long march toward having enough landing craft, aircraft and missiles to subdue Taiwan, which Beijing considers a rebel province within the decade.

If Taiwan falls to China, then it would be the end of America’s great-power status.

U.S. allies in Asia and Europe would lose confidence in American security assurances. Beijing would be emboldened to further expand its sphere of influence and ramp up intimidation of its neighbors including Japan, South Korea, The Philippines, Vietnam, Indonesia and Malaysia.

American leadership responsible for keeping peace in East Asia and Europe since the end of World War II would be meaningless.

Keeping Beijing on its side of the Taiwan Strait could depend on the Biden administration accelerating the delivery of these missiles.